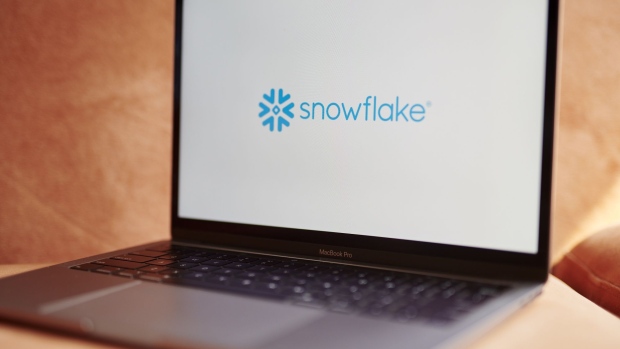 Snowflake Inc. signage is displayed on a laptop computer in an arranged photograph taken in the Brooklyn borough of New York, U.S., on Wednesday, Sept. 16, 2020. Snowflake Inc. soared in a euphoric stock-market debut that transformed the eight-year-old software company into business valued at about $72 billion. Photographer: Gabby Jones/Bloomberg , Bloomberg

Snowflake rose as much as 10 per cent for a market capitalization of about US$120 billion. The stock has now gained more than 40 per cent since Dec. 2, when its first-earnings report as a public company impressed Wall Street analysts with triple-digit revenue growth.

IBM, which is projected to generate about US$74 billion in revenue this year, has a market cap of US$112 billion, while AMD, with nearly US$10 billion in projected sales, weighs in at US$111 billion. Snowflake revenue is estimated to be US$578.2 million in its current fiscal year which ends at the end of January.

Total call option volume on Tuesday exceeded the 20-day average by 10:15 a.m. in New York and outpaced put options by a rate of almost 3-to-1.