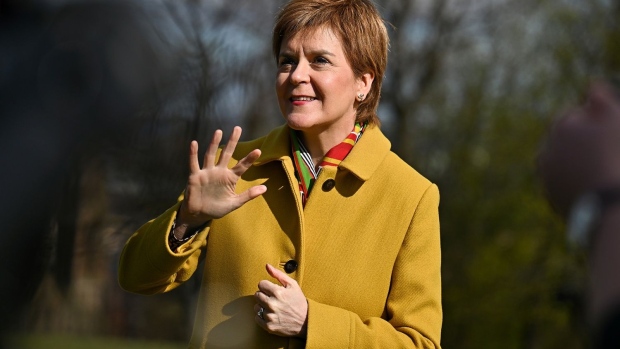 (Bloomberg) -- The Scottish National Party is on track for its biggest-ever win in next month’s election, according to the latest opinion poll, an outcome that would escalate a standoff with the British government over a fresh vote on independence.

First Minister Nicola Sturgeon’s party could win as many as 70 of the 129 seats in the Scottish Parliament on May 6, the Ipsos MORI poll for STV published on Wednesday found. The survey also showed majority support for breaking away from the rest of the U.K.

Because of the nature of Scotland’s electoral system, the SNP has only once won a majority before -- in 2011, when it garnered 69 seats. After that vote, the U.K. granted Scotland the right to a referendum on independence. Prime Minister Boris Johnson has so far refused to consider allowing another one regardless of the result next month.

The pro-independence Scottish Green Party, which supports the SNP’s current minority government, is seen winning 11 seats, more than double the five it won at the last election in 2016. That would create a bloc of 81 seats in favor of calling time on the three-centuries-old union with England and Wales.

“The May 6 Scottish elections are still flying under the radar for many investors” in the pound, said Valentin Marinov, head of G-10 foreign-exchange strategy at Credit Agricole. “A potential supermajority for the pro-independence parties after the vote could change that.”

The poll showed the new Alba Party led by Alex Salmond, the former first minister and SNP leader, isn’t on track to enter parliament. Salmond’s public spat with Sturgeon over her government’s handling of sexual harassment claims against him had dominated Scottish politics before parliament broke for the election campaign.

Ipsos MORI polled 1,038 people of voting age between March 29 and April 4. Support for independence was largely unchanged at 52% versus 48%, when undecided voters are excluded.

“Independence remains the top issue for Scotland’s voters and an independence ‘supermajority’ at Holyrood looks within the realms of possibility,” said Emily Gray, managing director of Ipsos MORI Scotland. “Our poll indicates that this may come from an uplift in support for the Scottish Greens on the regional vote rather than for the Alba Party.”