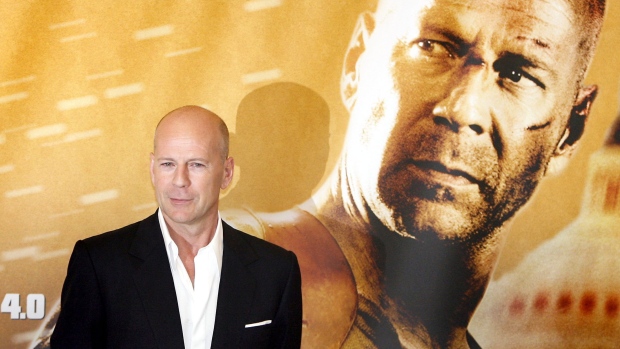 U.S. actor Bruce Willis poses for the photographers during a photo call for his new movie 'Die Hard 4.0' in Berlin, Germany, Monday, June 18, 2007. , The Canadian Press

TORONTO -- Canadian cinemas say they are losing the rights to screen fan favourites like "Die Hard" and "Home Alone" after the 20th Century Fox (FOXA:US) back-catalogue was swallowed up by The Walt Disney Co. (DIS:US)

Theatre operators across the country, from entertainment giant Cineplex Inc. (CGX:CT) to smaller indie cinemas, said Wednesday they can no longer book popular films from the Fox archives.

Rachel Fox, senior programmer at the Rio Theatre in Vancouver, said she is deeply concerned about the survival of her independent theatre, which shows first-run feature films and also encourages fans to get interactive with nostalgic movies, including "Wayne's World" and "The Jerk."

"It's such a slap in the face," she said, adding the move has "crippled" the Rio because it significantly reduces the number of money-making films it is able to screen.

"This, to me, as somebody who's been doing this at an independent venue that we fought so hard to save, is devastating," she said.

"There's only so much in back-catalogue stuff that has the legs that enough people are going to come out to make it worth it. And to not have access to the Fox catalogue is limiting. So goodbye 'Die Hard,' nice knowing you, happy Christmas."

Independent filmhouses have been worried about losing access to the archives ever since Disney took over Fox's entertainment assets earlier this year, said Eric Veillette, programming director at Toronto's Revue Cinema. He said a Disney representative confirmed to the cinema that it will no longer be able to book catalogue films from Fox.

"This is something that a lot of exhibitors have been fearing for some time, because Disney has had a long-standing practice of not allowing any of its archival catalogue to be screened theatrically."

A Disney spokesperson says there has been no change in policy on their end for repertory cinemas, which typically show older films.

"If the theatre is a repertory theatre, they will still have their usual access to the Fox (and Disney) library through our non-theatrical department," said Julia Caslin in an emailed statement.

That's not the message Rachel Fox says she has received at the Rio. She said she was given no notice about a change, nor notice that her usual two contacts at 20th Century Fox had left the company.

Canadian indie theatres are not the only ones feeling squeezed by the entertainment mega-merger south of the border.

Cineplex, which shows a variety of older movies through its repertory film series, is experiencing a similar issue, said spokeswoman Sarah Van Lange.

She said Cineplex has several Fox films scheduled for later this year including "Fight Club" and "Alien," but that going forward they won't be able to book films from the studio's archives.

When the Rio's Fox got through to her new contact at Disney this week she said she was told there was only one 20th Century Fox film available for booking.

"'The Rocky Horror Picture Show' is still available for booking, that is the only title available," she said.

Disney has not returned requests for further clarification.

The company acquired Fox for US$71.3 billion in March, gaining control of a huge catalogue that includes everything from silent era films, to "The Sound of Music," to blockbusters like "Titanic."

"It's certainly never a good thing when one company owns too many things," said Veillette.

He said that while it's a shame to lose the titles, there are still a wide range of films from other studios for the non-profit Revue Cinema to choose from.

"Even though we're losing some choice films, which is a shame, and I'm happy to make that clear, there's still a lot to work with."

Disney has been amassing content as competition heats up in the online streaming world. The company plans to launch Disney Plus, its answer to competition from Netflix, Apple and Amazon, in November.