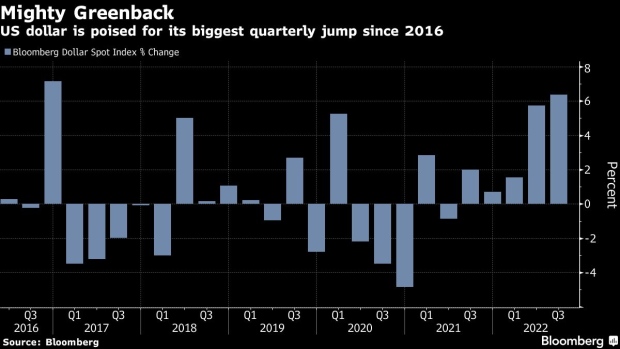 Commuters outside the TD Tower in the financial district of Toronto, Ontario, Canada, on Monday, Nov. 22, 2021. Many of Canada’s large financial firms say they have a growing portion of their workforces back in the office and the numbers are expected to swell in the New Year. Photographer: Cole Burston/Bloomberg , Bloomberg

(Bloomberg) -- The dollar’s relentless rise threatens to wipe $60 billion in sales from the biggest US firms. Two weeks from earnings season, investors are sticking around to find out what that means for corporate America’s bottom lines.

A basket of S&P 500 companies with high foreign sales exposure has underperformed a basket of companies with low exposure by 17.4% since the dollar began its ascent in January 2021, according to data compiled by 22V Research.

The dollar, which has appreciated versus all its major peers, is poised for its biggest quarterly jump since the fourth quarter of 2016, with Bloomberg’s greenback gauge hitting an all-time record high earlier this week. That erodes the value of sales generated overseas for US corporations, likely pressuring already thinning profit margins.

“The dollar is an increasing headwind to S&P top-line growth at a time when earnings are coming under pressure from slowing demand and a needed decline in profitability,” wrote Dennis DeBusschere, founder of 22V Research, in a note on Wednesday. “Companies with high foreign sales exposure are most at risk.”

Stocks in the semiconductor, tech hardware, and household products groups will be impacted by dollar gains and currency volatility more than utilities and telecommunications, according to 22V.

While analysts have been warning about the stronger dollar’s impact on earnings for several quarters, Huw Roberts, head of analytics at Quant Insight, said the greenback’s dominance is only beginning to take center stage.

“It’s going to be a really core part of the upcoming earnings season,” he said in a phone interview. “These things happen with a lag, and the real aggressive up move in the dollar happened in the last few months. So, it’s probably now beginning to have a material impact on company bottom line.”