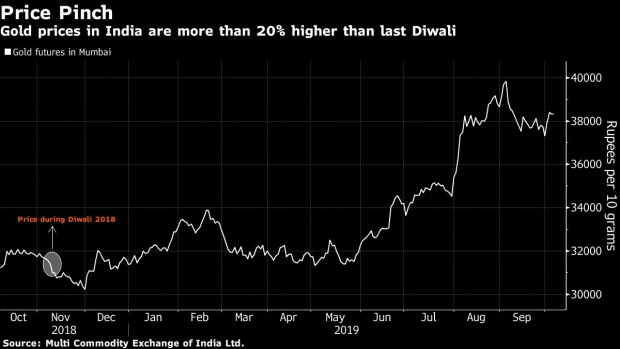 A worker stands near gold necklaces on display at the P.N. Gadgil Jewellers Pvt. flagship jewelry store in Pune, India, on Monday, Aug. 17, 2017. About three quarters of the estimated $45 billion of the precious metal that is traded in the country each year makes its way through thousands of family-run jewelry shops that have catered for centuries to the nation's love of gold. Photographer: Dhiraj Singh/Bloomberg , Bloomberg

With less than a month to go before the Hindu festival of Diwali, a period when gold purchases typically peak, jewelers are lining up promotions to get buyers through the door as a rally in prices coincides with a collapse in consumer demand for everything from 7-cent cookies to cars.

Gold has soared in 2019, hitting a six-year high in dollar terms, as investors fret about the impact of the trade war, central banks cut rates and exchange-traded fund holdings surge. In India, where prices hit a record in September, the rally comes as the country’s growth slows, unemployment rises and a crisis of confidence engulfs the banking system. Its imports fell for a third month in September to the lowest in more than three years as jewelers cut purchases.

“Buying of gold during festivals and wearing it has been our tradition for decades,” according to Manish Kotekar, a 28-year-old taxi driver in Mumbai. “We have been waiting for prices to drop before buying gold as the rates are too high,” and if prices don’t go down below current levels by Diwali, “we may not buy this year. It is just not within our budget to buy at these prices.”

Benchmark gold futures in Mumbai touched an all-time high of 39,885 rupees ($561) per 10 grams in early September and while prices have come off about 4% since that peak, they’re still more than 20% higher than last year. Diwali falls on Oct. 27 and is preceded by Dhanteras, the most auspicious day in the Hindu calendar to buy gold.

“Diwali is just a festival on the calendar this year and there is no festivity for jewelers in the market at all. It’s very bad,” Ketan Shroff, a director at Mumbai-based jeweler Penta Gold Pvt. and a former joint secretary of the India Bullion and Jewellers Association Ltd., said by phone. Companies are giving deep discounts “because there are no customers.”

Jewelers “will try to instigate demand, but in light of the general economic slowdown, no major change in demand prospects are likely before December,” said Harish Galipelli, head of commodity and currencies at Inditrade Derivatives & Commodities.

Here’s what some of the bigger retailers are planning for the festive season.

Tanishq, the flagship brand of India’s most valuable jeweler Titan Co., plans to cut the amount it charges to make jewelry by 25% for gold and a similar amount on the value of diamond jewelry. The charges vary across stores and can contribute as much as 10% to the total cost of an ornament. The company will also give jewelry to winners of a social media competition.

“The jewelry industry has seen a slowdown in the last few months,” said Rajan Amba, chief operating officer at CaratLane, which is 72% owned by Titan. “However, we are optimistic that in the festive season things will start looking up,” with customers seen opting for lightweight and affordable jewelry, he said. The company is giving deeper discounts on higher-end jewelry to encourage more sales.

The Warburg Pincus LLC-backed jeweler is perhaps the most generous among the lot, planning to give away 300,000 gold coins via a weekly draw in addition to discounts and lower charges for making jewelry, according to Chairman T.S. Kalyanaraman.

“The present dip in gold prices will further propel small ticket and token buying trends,” he said. Kalyan has also partnered with banks to give additional discounts.

The company is giving away gold coins on purchases above 15,000 rupees and is also allowing customers to place advance orders and buy jewelry either at the booked price or the rate at the time of delivery, whichever is lower.

“The economic slowdown has impacted consumer sentiment as a whole across industries and gold jewelry demand in particular, but we are looking the period positively since festive and wedding seasons account for a major share of the annual revenue of jewelers,” according to Chairman Ahammed M.P. Brides may opt for lighter jewelry sets during the wedding season given the increase in gold prices, he said. The peak wedding season in India begins soon after Diwali and gold forms an important part of Indian bridal trousseaus and as gifts in the form of jewelry.

To contact the reporter on this story: Swansy Afonso in Mumbai at safonso2@bloomberg.net