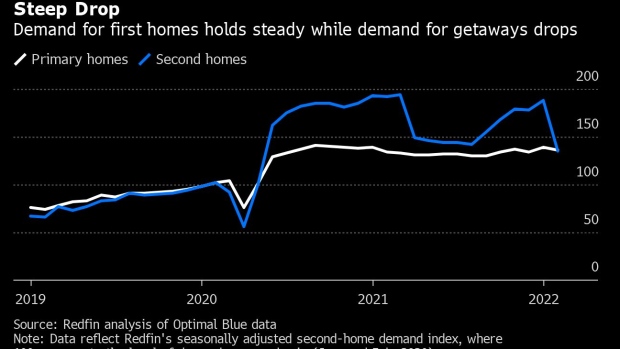 (Bloomberg) -- Demand for second homes in the U.S. is plummeting as mortgage rates climb steeply.

After a pandemic buying frenzy, mortgage-rate locks to buy second homes dropped last month to the lowest level since May 2020, according to a report by Redfin Corp. While demand was still up 35% from February 2020, before Covid-19 hit the U.S., it was significantly lower than the previous month’s 87% jump, the brokerage said.

Enthusiasm for vacation homes shot through the roof earlier in the pandemic as remote workers, untethered from the office, sought more sunshine and space. But escalating prices -- driven by fierce competition for a tight supply of listings -- and a recent surge in mortgage rates have slowed the boom.

Those two factors “are hitting the second-home market much harder than the primary-home market,” said Redfin Chief Economist Daryl Fairweather. “That’s largely because vacation homes are optional. People don’t need a second home, but they do need a place to live.”

Vacation-home demand peaked in March 2021, Redfin said. That was two months after Freddie Mac’s average 30-year mortgage rate hit a record low of 2.65%. Borrowing costs have shot up since the end of last year, landing at 4.67% this week.

The rapid increase has pushed even some primary-home buyers to the sidelines at a time when inflation is hurting their budgets. The challenges are particularly tough for first-time buyers who have struggled to find affordable properties as bidding wars for the tightest supply of listings on record push prices out of reach.

Would-be buyers of vacation homes face another potential obstacle: a fee increase ranging from an additional 1% to 4% on second-home loans backed by Fannie Mae or Freddie Mac. That could tack on as much as $12,000 to a $300,000 mortgage, payable upfront or rolled into the loan.

While the increase officially doesn’t take effect until April 1, the fees have been priced into loans for almost a month, so that may have deterred some buyers already, according to Rebecca Richardson, a broker at Wyndham Capital Mortgage in Charlotte, North Carolina. The city is about a three-hour drive to both the mountains and the beach, making the area a popular vacation-home spot.

Combined with rising rates, the fee increase “has definitely dampened the enthusiasm” among her clients, Richardson said. “It’s becoming a much weightier decision versus last year.”

That doesn’t mean the second-home boom is over, especially for people who can pay cash and whose remote-work plans have solidified.

“Still, people are buying up vacation homes more than they were before the pandemic, as work remains more flexible than it used to be,” Fairweather said.