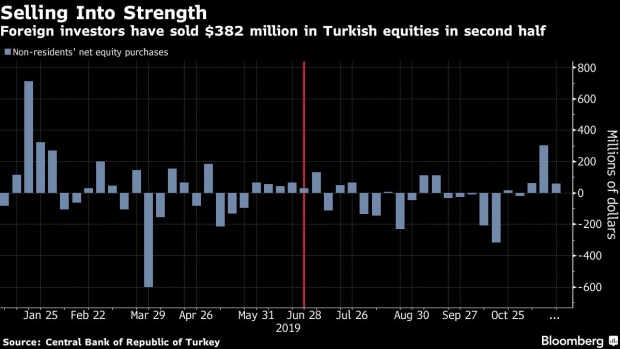 A visitor is reflected while crossing the trading floor at the Borsa Istanbul SA stock exchange in Istanbul, Turkey, on Tuesday, Aug. 14, 2018. While they are growing more critical, the underlying tone of warnings from businesses has so far been supportive of the government in principle, showing there are limits to how much Turkey’s billionaires are feeling emboldened to speak out after elections in June increased President Recep Tayyip Erdogan’s grip on power. Photographer: Ismail Ferdous/Bloomberg , Bloomberg

(Bloomberg) -- Turkey’s equity market has overcome the worst of a volatile year marked by political tensions and fallout from the incursion into Syria. But the renewed risk of U.S. sanctions may be about to ruin it all.

Istanbul’s main equity gauge is among the five best-performing benchmarks in the second half of this year, up 12% since the start of July, double its advance in the first six months.

To be sure, there have been some powerful tailwinds supporting the gains: government steps including a ban on short selling have helped in moments of strain, as have 1,000 basis points of central bank rate cuts and a recovering appetite among investors for risk assets.

“To adapt a football analogy, it’s been a year of two halves,” said Nigel Rendell, a senior analyst at Medley Global Advisors LLC in London.

The early part of 2019 tested investor resolve, with a slowing economy, fractious local elections and the purchase of a Russian missile-defense system that hurt Ankara-Washington relations. While government measures have helped to stabilize the lira, they have added to uncertainty over the longer-term outlook and added to the risk premium of holding Turkish assets, Rendell said.

But, it’s the potential for sanctions that poses a far more pressing threat, according to Cristian Maggio, head of emerging markets at TD Securities in London.

Turkey has just tested radar systems for the Russian S-400 missile-defense technology, providing further ammunition for U.S. lawmakers who favor punishing their NATO ally for the purchase. Such measures, if imposed, could limit any gains in Istanbul stocks, leaving investors facing geopolitical risks disproportionate to their potential returns.

Sanctions are being widely underestimated, according to Maggio, who describes them as “a big risk” made worse by a lack of visibility on their timing.

“Sanction risks are not so relevant until they become relevant, and the frequency of news on the matter, the kind of statements, the perceived direction of diplomacy and many other, to some extent subjective, factors determine market implied positioning,” he said.

There are already signs foreign investors are locking in gains. In the first half, they were net buyers of $851 million in Turkish equities, according to central bank data. Outflows since the end of June exceeded $380 million as of Nov. 22.

To contact the reporter on this story: Tugce Ozsoy in Istanbul at tozsoy1@bloomberg.net