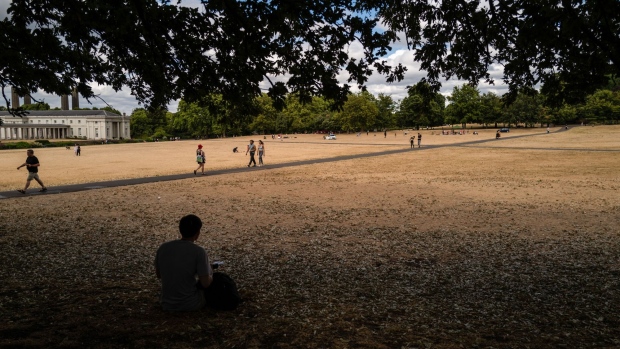 A visitor shelters in the shade of a tree on parched ground in Greenwich Park in the Greenwich district of London, UK, on Wednesday, Aug. 3, 2022. Across London — and most of England — the unprecedented heat this summer has pushed plant life, infrastructure and residents to the edge. , Bloomberg

(Bloomberg) -- Another bout of extreme heat and dry weather set to sweep Europe has pushed the UK and France to issue fresh warnings for this week.

The UK Met Office warned of extreme heat in London and southeast England from Aug. 11-14, while the country’s Health Security Agency extended a heat-health alert that started on Tuesday for all regions until Aug. 14. The French state forecaster has a similar “extreme heat” amber warning out for parts of the south.

The forecasts cap a summer of extremely high temperatures across Europe, damaging infrastructure and raising the risk of droughts as the effects of climate change kick in. France registered the driest July on record and England the driest in almost 90 years. Water levels on the Rhine River, a vital artery for the transport of commodities and industrial goods, are so low that trade is at risk of coming to a halt on some sections of the waterway.

This week’s heat wave will not be as intense but longer than one earlier in the summer, staying around until the end of the week in the south of France, forecaster Meteo France said. Temperatures in Paris are expected to peak at 34.5 degrees Celsius (94.1 degrees Fahrenheit) on Friday, according to Maxar Technologies LLC.

Temperatures are expected to reach mid-30 degrees Celsius on Friday across South East England, London, the Southwest, and the East and West Midlands, the UK health agency said.

“Remember that heat can have a fast impact on health,” said Agostinho Sousa, head of extreme events and health protection at the agency. “It’s important to ensure that people who are more vulnerable – elderly people who live alone and people with underlying health conditions – are prepared for coping during the hot weather.”

Power prices in France and Germany reached record levels on Monday as low wind and heat-related restrictions at coal and nuclear plants boost demand for gas. That’s setting the stage for a more difficult winter as countries rush to store fuel.

The heat will boost demand for cooling, aggravating the already dry conditions that hurt crops and force limits on water use. In Spain, the government has moved to prevent offices and shops from setting air conditioning below 27 degrees Celsius in the summer in order to cut the country’s energy consumption.

Ireland issued a hot weather advisory from Wednesday through the end of the weekend. Temperatures are expected to reach the mid-to-high 20s Celsius -- extremely warm for the country, which saw its highest temperature in over a century at 33 degrees last month.

The weather has also sparked fires near London, triggered warnings that railway lines could buckle, and forced power stations in Germany and France to operate at low levels to prevent overheating. The French nuclear regulator has granted a temporary waiver for five nuclear plants to discharge hot water into rivers that may breach environmental standards, an extreme measure to ensure there’s enough electricity.

German state forecaster DWD warned that in some areas there is a very high risk of forest fires. Data from late July shows that 45% of European Union countries are facing drought warning conditions and 15% are at alert levels, the European Drought Observatory says.