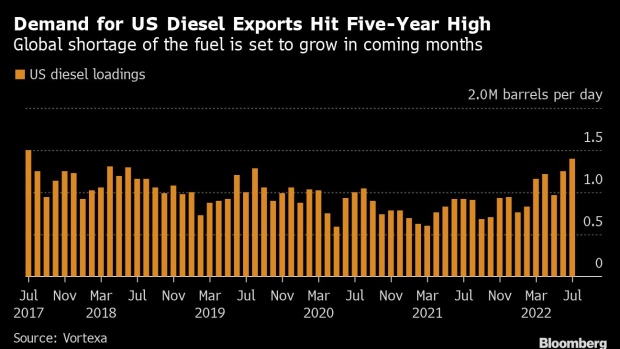 (Bloomberg) -- A worldwide diesel supply crunch is making more of the world dependent on US fuel exports, a situation that could worsen heading into the winter.

US diesel exports last month rose to 1.4 million barrels a day, a five-year high, according to data from oil analytics firm Vortexa compiled by Bloomberg. Europe is buying more US diesel as the continent tries to wean itself from Russia. Latin America has also stepped up imports, in part to replace lost volumes from Europe.

Diesel prices rose to the highest ever in the wake of Ukraine’s invasion as efforts to retaliate against Vladimir Putin led to bans on Russian oil. The UK aims to end its imports of Russian fuel by the end of the year. Also, a lack of natural gas threatens to curtail European refinery operations, heightening the continent’s dependency on imports. Meanwhile, in Brazil, a leading importer of US fuel, diesel demand is set to rise during the upcoming harvest season.

“The short-term diesel outlook is one of tight fundamentals through the coming winter,” ESAI Energy analysts including Linda Giesecke said. Demand may rise even more in Europe and Asia in the coming months as high natural gas prices prompt some to switch to crude, ESAI said.

The US will need to balance rising export demand with domestic needs that are also expected to increase. Agricultural demand for diesel typically peaks in the Midwest during the fall harvest months, which is quickly followed by winter heating demand in the northeast.

Shipping more diesel to Europe is going to be a “real challenge” for the US due to tight supplies, Valero COO Gary K Simmons said last week during an earnings call.