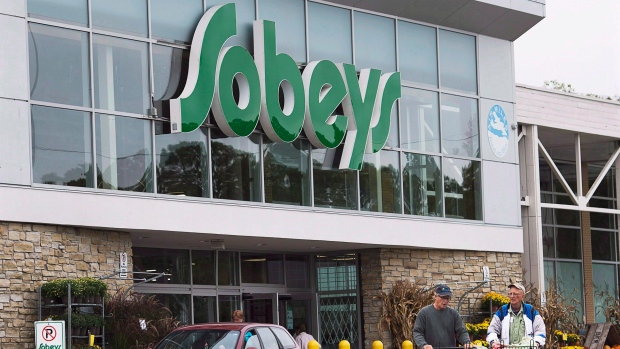 Time-strapped grocery shoppers in Ontario and Quebec will soon have another option to skip checkout lines. Sobeys’ parent company Empire Co. Ltd. (EMPa.TO) is entering the grocery delivery market, and says the move will add about 3,000 jobs.

Voilà by Sobeys and Voilà par IGA will expand the grocery retailer’s e-commerce strategy and provide up to 39,000 products for home delivery in the Greater Toronto Area, Ottawa and major Quebec cities, Empire said in a release Thursday.

Empire plans to build two customer fulfilment centres, including one in Vaughan, Ont. that will serve the Toronto area and is set for completion in the spring of 2020. The second fulfilment centre will launch in Montreal in 2021, expanding Voila services to the Ottawa and Quebec regions. Quebec delivery services will be branded as Voilà par IGA.

Each centre is expected to employ about 1,500 workers.

“While most players in the industry are focused on store pick models to fulfil their online orders, we are building automated warehouses specifically designed for best-in-class home delivery based on a highly successful model from the U.K.,” Empire’s senior vice president of e-commerce, Sarah Joyce, said in a release.

Empire announced in January 2018 that it was partnering with Ocado Group to help build and operate its new digital shopping platform. U.K-based Ocado uses robotics for automatic, warehouse-based fulfilment for European retailers.

Canadian grocers have been rapidly building home delivery capabilities in an effort to keep up with shifting consumer demands and compete with Amazon’s expansion into the grocery market. Last year, Costco Wholesale Corp. unveiled home delivery options in southern Ontario and Uber Eats has also indicated it is looking to enter the grocery delivery market in the future.