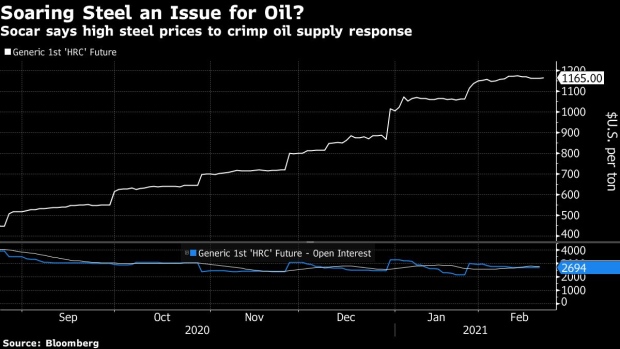 (Bloomberg) -- Oil prices will hit $80 a barrel this year as demand comes roaring back and producers won’t be able to immediately respond with sufficient supply, Socar Trading SA said, joining a chorus of bullish calls on the market.

Hayal Ahmadzada, Socar’s chief trading officer, said the glut of excess oil stocks that built up in 2020 in response to the pandemic will be fully drawn down by the summer. At the same time, soaring prices for steel used in pipes, wells and fittings as well as the high cost of capital for producers will crimp a meaningful supply response by an already hobbled industry even as demand returns.

“I will not be surprised if we see $80 a barrel in summer or before year-end and above $100 a barrel in the next 18 to 24 months,” Ahmadzada said in an interview from Baku, Azerbaijan.

The global trading arm of the government-controlled State Oil Company of Azerbaijan Republic, Geneva-based Socar Trading is one of the world’s biggest energy trading houses, handling around 1 million barrels a day of crude and petroleum products, giving it keen insight into global energy supply and demand.

Socar joins larger rival Trafigura in calling a bull run for oil and most products. Crude has gained more than 20% this year after Saudi Arabia’s pledge to deepen production curbs turbocharged a rally triggered by Covid-19 vaccine breakthroughs.

Ahmadzada said Socar had already sold all of the oil it stored during the crisis, as much as 15 million barrels.

The Azeri national and veteran trader said soaring steel prices means oil services contractors will struggle to build pipes, wells and other infrastructure needed to bring back production on time and on budget. That will slow the supply response even as demand returns as countries emerge from lockdowns and other restrictions.

“We may see a shake-out in that industry, due to very high steel prices,” he said.

Ahmadzada added he expects the Organization of Petroleum Exporting Countries and its allies, which includes Russia, to taper production cuts and return to pumping crude at full tilt soon. Even so, it won’t be enough, he said.

Even with Saudi Arabia and Texas producing, “the fear is that in 12 months there will be a shortage,” he said. “It will drive the price very high very fast.”

Adding to producer’s woes is the rising cost of borrowing as banks impose higher lending rates on “dirty” oil production.

“It’s coming. Credit costs are much higher and the appetite for risk is much lower. The majors are cutting jobs and reducing capex. All the ingredients are there,” he said.

An industry veteran who worked at the Azeri state producer for more than a decade before joining Socar Trading in 2008 to lead its crude desk, Ahmadzada said the unprecedented oil price collapse in April 2020 and the shuttering this month of more than a third of U.S. production because of freezing weather, has ushered in a new era of market disruption that he expects to continue.

“You don’t know when these babies are coming.”