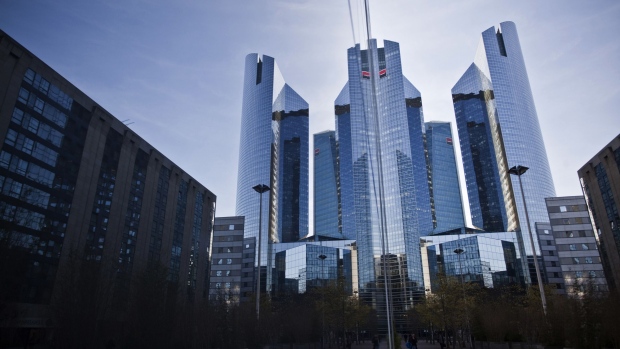 (Bloomberg) -- Societe Generale SA has told its staff in France not to organize in-person events, as it ramps up measures to avoid Covid infections at its premises.

The Paris-based bank informed employees of the new policy in the last weeks, and the ruling applies to training events, seminars and other such gatherings, a spokeswoman for SocGen said. Events that were already planned have been moved online, the spokeswoman said.

Banks are beginning to react to concerns over the new omicron variant of the coronavirus. UBS has told its European employees to not travel for business, JPMorgan Chase & Co. has called off a festive carol event in London.

SocGen has enforced stricter distancing rules in its cafeteria, removing chairs in order to keep a 2-meter distance between diners, the spokeswoman said. Employees are also required to avoid external company events, such as year-end gatherings, if they involve more than 20 staff.

The lender’s remote work policy, which allows its staff to work as much as three days a week from home, will remain unchanged, she said.

In a press conference on Monday, French Prime Minister Jean Castex recommended that the French try to work remotely, in a bid to curb infections and avoid prevent hospitals from becoming overwhelmed. In France, the number of new Covid cases has been rising in recent weeks, now hovering between 40,000 and 50,000 per day.