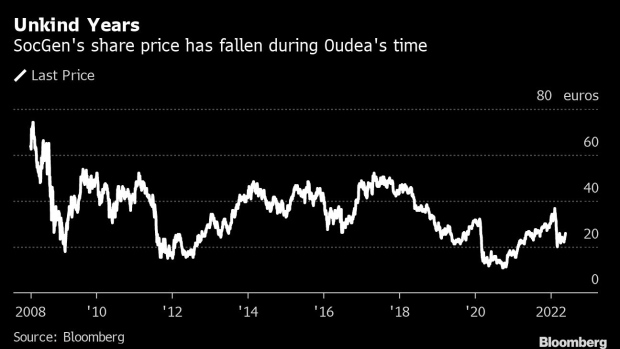 The Societe Generale SA headquarters in the La Defense business district in Paris, France, on Monday, Feb. 7, 2022. SocGen, which is scheduled to announce earnings on Feb. 10, has entered into exclusive negotiations with ING Groep NV to attract its French retail banking customers, as the Dutch lender exits the market. , Photographer: Bloomberg/Bloomberg

(Bloomberg) -- Slawomir Krupa has been running Societe Generale SA’s investment bank from New York since becoming its boss in January 2021. It’s been a puzzling decision for some of his colleagues: Many of the French firm’s traders are thousands of miles away in Europe.

Now he may have a reason to return home. Frederic Oudea is stepping down as SocGen’s chief executive officer after 14 underwhelming years at the helm and Krupa is seen as one of the main internal candidates to take over. Sebastien Proto, who runs SocGen’s domestic retail bank, is his likeliest in-house rival.

It’s a fascinating duel between contrasting figures. Proto has the impeccable elite credentials — degree from the Ecole Nationale d’Administration, job as a state auditor, five years at Rothschild & Co. — that might once have made him a shoo-in. Krupa has worked at SocGen for more than two decades and has made a strong start as its trading head, but his harsh managerial style isn’t always appreciated by staff, people who’ve worked with him say.

But with the search going on until the fall, the two insiders have a chance to set out their stall for running the 158-year-old firm. “Previous company commentary on Proto and Krupa as the ‘new generation’ strongly implies they’re the intended successors,” says Matthew Clark, a Mediobanca analyst.

Proto’s big challenge is finishing an internal merger of SocGen’s French retail lenders and persuading the board that his four years at the bank is enough. Whereas his “enarque” background is remarkably similar to that of Oudea and other ex-SocGen bosses, that’s no longer the trump card it was as President Emmanuel Macron — another ENA, Inspection Generale des Finances and Rothschild alumnus — tries to counter criticism of France’s lack of “egalite.”

Krupa was hardly the recipient of a poor education. Like Proto, he got a degree at the prestigious Sciences Po, before joining SocGen in 1996. One of his tests is that being in New York makes it tougher to cultivate allies in the Paris HQ.

Whoever takes over won’t have it easy. Oudea’s reign has been marred by successive crises such as Libor rigging, and regular restructuring plans. Since he became CEO in 2008 the share price has fallen more than 60%. French rival BNP’s stock has dropped about 21%.

The next boss will need to strengthen SocGen by joining with another lender, says Jean Dermine, banking and finance professor at INSEAD. “What’s relevant is no longer whether one’s ‘Inspecteur des Finances’ or not, but who’s the best candidate, who could organize the merger of SocGen and achieve it. That means not only someone with financial skills, but also organizational skills.”

Russia’s invasion of Ukraine and SocGen’s hasty sale of its Russian lender, Rosbank PJSC, hasn’t helped. The French bank will take a 3.2-billion euro ($3.4 billion) charge on the disposal.

That overshadows a recent improvement in SocGen’s fortunes, sparked by better trading results and moves by Oudea such as merging the domestic retail networks, beefing up digital bank Boursorama and establishing a leading European car-leasing unit. “After lacking strategic impetus for several years, SocGen has been in much better shape in the past year and a half,” says Jerome Legras of Axiom Alternative Investments.

The size of the job may explain the hesitation over naming a successor and the six-month search. “A lack of an immediate appointment implies that the board needs to think about which of the designated internal candidates has the breadth of skills required to manage the entire bank,” says Jon Peace, banks analyst at Credit Suisse Group AG.

Oudea spent five years as finance chief before getting the top job. Proto and Krupa “are both focused on their respective businesses and have a less broad view,” Peace adds. The French retail bank and the investment bank each provide about a third of SocGen’s revenue.

Known for his analytical rigor, Proto joined SocGen 2018 as head of strategy. He’s now in charge of merging the two French retail lenders, Societe Generale and Credit du Nord — an arduous task involving thousands of job cuts that’s at the heart of Oudea’s strategic rejig. It’s on track for completion by early 2023, though Mediobanca’s Clark says the benefits may not show up until 2024.

Proto’s lack of experience at the investment bank means he doesn’t have much of a profile there and he’s spent less time than his rival dealing with regulators, an essential part of any global bank CEO’s toolkit.

Krupa was CEO of Societe Generale Americas during its remediation talks with the U.S. Department of Justice over Libor manipulation and the bribing of Libyan officials. He worked with the Federal Reserve to improve SocGen’s compliance. “Krupa has been in charge of a defined legal entity for an extended period of time, and managed it through a challenging period of regulatory disputes with a satisfactory outcome,” says Clark.

His career within SocGen’s internal auditing body and investment banking operations may make him more knowledgeable than his rival about its inner workings. Under his leadership the investment bank has outperformed expectations, though he’s benefited from predecessors’ changes.

Conversations with several people familiar with Krupa also depict an abrasive management style that seems at odds with industry-wide efforts to cater to bankers’ well-being, even if it’s sometimes needed when dealing with fiery traders.

His reputation for shouting at subordinates has deterred people from working with him in the past. When he was CEO of SocGen Americas, some bankers offered the opportunity to relocate to New York politely declined, a person familiar says. His approach strained his relationship with former chief trader Jean-Francois Gregoire, some of the people said.

And the need to refresh the upper echelons may not end with Oudea. “The performance of Societe Generale hasn’t been remarkable,” says Insead’s Dermine, who wonders about Chairman Lorenzo Bini Smaghi too. “The question needs to be asked not only for the chairman, but also the board of directors.”

A spokesman for SocGen said the succession process was confidential. Bini Smaghi, Krupa and Proto declined to comment.