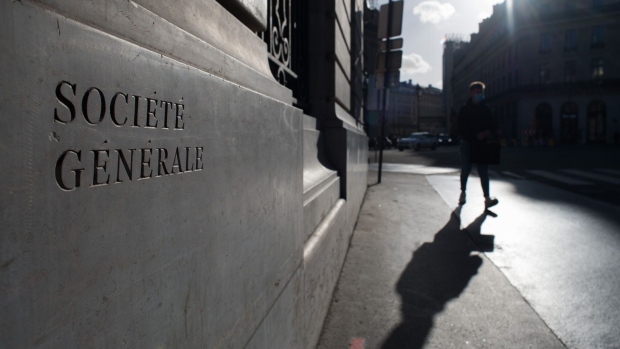 A pedestrian passes a Societe Generale SA branch and office in the bank's former headquarters on Boulevard Haussmann in Paris, France, on Monday, Feb. 7, 2022. SocGen, which is scheduled to announce earnings on Feb. 10, has entered into exclusive negotiations with ING Groep NV to attract its French retail banking customers, as the Dutch lender exits the market. Photographer: Nathan Laine/Bloomberg , Bloomberg

(Bloomberg) -- Societe Generale SA cut its exposure to counterparties on trades in China by about $80 million in the past few weeks as global banks seek to guard against any potential fallout from rising geopolitical risks in the world’s second-largest economy.

It has several hundred million dollars in positions on China’s Financial Futures Exchange, people familiar with the matter said, asking not be identified as the details are private. The French bank has been seeking to replicate those positions elsewhere in Asia, they said.

Like other firms and multi-nationals, the bank’s executives are growing increasingly concerned about a whole swathe of problems hitting China in recent months, although the country remains a key part of its strategy, the people said.

Increased rhetoric between Beijing and Washington over Taiwan has unsettled firms in the past few months, coming shortly after Russia’s war unexpectedly forced the world’s largest banks to exit businesses and stop serving some ultra-wealthy clients. US lawmakers recently ramped up pressure on banks to answer questions on whether they would withdraw from China if it invaded Taiwan.

A spokesperson for SocGen declined to comment. The bank’s businesses in the Asia-Pacific region span corporate and investment banking to asset management, securities services and global transaction banking, according to its website.

While SocGen’s exposure is relatively small by global banking standards, the move is a reflection of increased risk aversion among firms following years of build up in China.

Wall Street and European powerhouses have expanded over the past years after the nation allowed full ownership of ventures on the mainland. UBS Group AG, the Swiss lender, became the first foreign bank to gain majority control of a Chinese securities joint venture in 2018 while JPMorgan Chase & Co. won approval in 2021 to take full ownership of its investment banking venture.

At the same time, China’s economy is sputtering because of the country’s strict pursuit of Covid Zero, a teetering property market and a multiyear crackdown on private enterprise as President Xi Jinping prepares this month to take on a third term in charge.

US President Joe Biden is set to ratchet up pressure further on China’s economy and industries. The administration plans to announce new restrictions on China’s access to US semiconductor technology, people with knowledge of the situation have said, an escalation of efforts to stifle Beijing’s industrial ambitions and a risk to growth for the $550 billion sector.