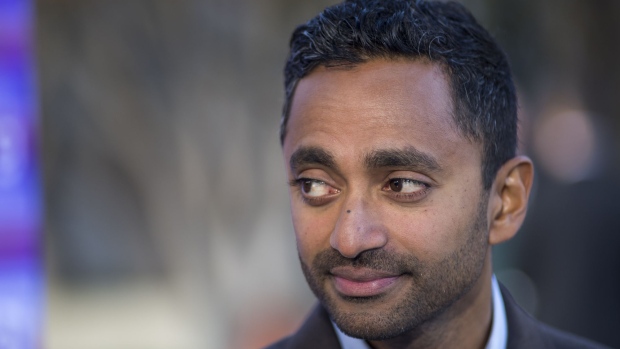 (Bloomberg) -- Social Capital Hedosophia is seeking to raise $500 million for its newest blank-check company, according to people with knowledge of the matter.

The partnership between Chamath Palihapitiya and Ian Osborne, longtime investors who together have raised three special purpose acquisition companies, has confidentially filed plans with the U.S. Securities and Exchange Commission, said the people, who asked not to be named because the information isn’t yet public.

The vehicle, known as Social Capital Hedosophia Holdings Corp. IV, is set to be the fourth in a string of as many as 26 such deals. On a podcast, Palihapitiya said he reserved tickers ranging from “IPOA” through “IPOZ” on the New York Stock Exchange.

A representative for Social Capital Hedosophia declined to comment.

For private companies, mergers with blank-check firms -- which are raised without having identified an acquisition target -- have soared in popularity as an alternative to an initial public offering or direct listing. Gary Cohn, Bill Ackman and Barry Sternlicht are among executives that have raised vehicles in recent months.