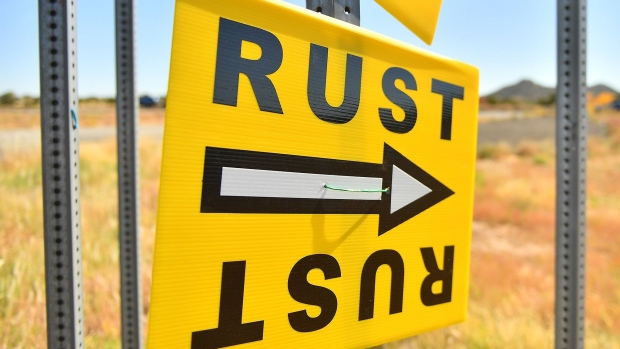 SANTA FE, NEW MEXICO - OCTOBER 22: A sign directs people to the road that leads to the Bonanza Creek Ranch where the movie "Rust" is being filmed on October 22, 2021 in Santa Fe, New Mexico. Director of Photography Halyna Hutchins was killed and director Joel Souza was injured on set while filming the movie "Rust" at Bonanza Creek Ranch near Santa Fe, New Mexico on October 21, 2021. The film's star and producer Alec Baldwin discharged a prop firearm that hit Hutchins and Souza. (Photo by Sam Wasson/Getty Images) , Photographer: Sam Wasson/Getty Images North America

More details have emerged on Alec Baldwin’s misfire of a loaded prop weapon on a film set that killed one person and injured another.

Donald Trump’s tech SPAC could make him the richest he’s ever been by adding billions with a massive boost from meme-stock mania.

Facebook’s employees took to an internal discussion board to express shock and outrage as the social media giant failed to police its platforms ahead of the siege on the U.S. Capitol on Jan. 6, according to documents obtained by a consortium of news organizations including Bloomberg.

Walmart Inc. is recalling an aromatherapy spray in the U.S. because of the possible presence of the bacteria that can cause meliodosis, a rare and possibly fatal infection. Two deaths in the U.S. have been reported.

Global leaders will meet at the UN’s COP26, a series of high-stakes climate talks, in Glasgow this month as hopes fade for a deal to end the world’s reliance on coal, the biggest obstacle to meeting the Paris Agreement goal of limiting warming.