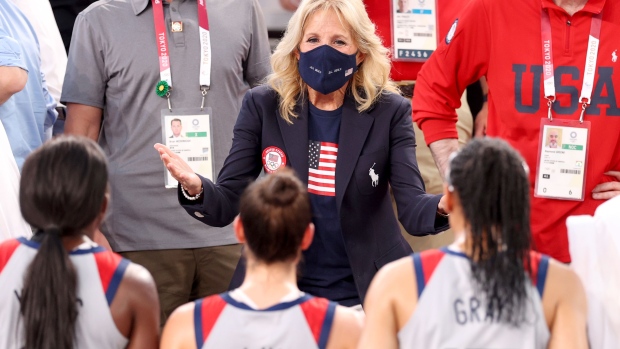 U.S. government health officials increasingly expect vulnerable people will need to be given Covid-19 vaccine booster shots, the New York Times reported, without saying where it got the information.

First Lady Jill Biden arrived at the Tokyo Olympics to cheer for American athletes. Earlier Saturday, she watched a 3-on-3 women’s basketball game between the U.S. and France with French President Emmanuel Macron, in which the U.S. team won.

Thousands of anti-lockdown protesters flooded into Sydney, defying stay-at-home orders imposed as Australia grapples with resurgent infection rates and a sluggish vaccination program. Some clashed with the police, and more than 50 people were charged with offenses.

Arizona state senator Wendy Rogers drew controversy online with her comment after Cleveland’s Major League Baseball team made the decision to change its name to the Guardians from the Indians.