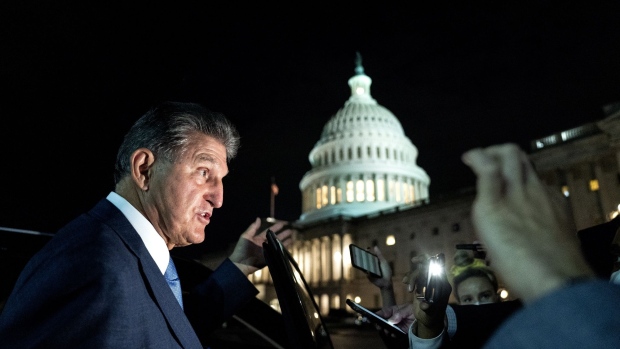 Senator Joe Manchin, a Democrat from West Virginia, speaks to members of the media while departing the U.S. Capitol in Washington, D.C., U.S., on Thursday, Oct. 7, 2021. The U.S. Senate approved legislation that pulls the nation from the brink of a first-ever payment default with a short-term debt-ceiling increase, breaking a weeks-long stalemate that rattled financial markets. , Bloomberg

President Biden’s clean-power plan, a major element of his climate legislation, is at risk of collapsing because West Virginia senator Joe Manchin opposes it in the Democrats’ spending package.

U.K. Home Secretary Priti Patel ordered a review of police security arrangements for lawmakers after Conservative MP David Amess was fatally stabbed at a meeting in his constituency on Friday.

Hooters is trending after some waitresses at the restaurant chain complained on TikTok that their new uniforms are too short, NBC News reported.

Instagram was privately worried potentially losing teenage users to other social-media platforms, calling it an “existential threat,”  the New York Times reported on Saturday, citing a marketing presentation for 2018.

NASA’s Lucy mission launched at 5:34 a.m. Saturday at Cape Canaveral in Florida. Over the next 12 years, Lucy will investigate “fossils” of planetary formation. It will be the first spacecraft to study Jupiter’s Trojan Asteroids.