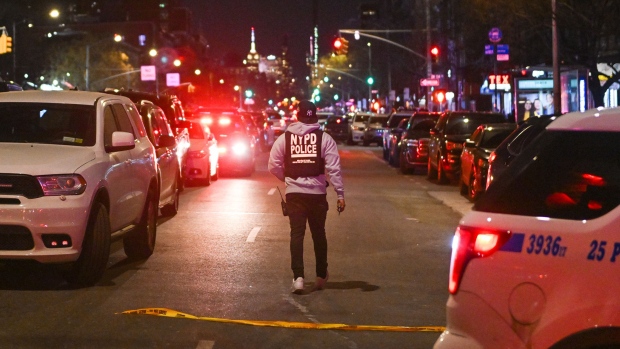 Police lock down the scene after two NYPD officers were shot in Harlem on Jan. 21, 2022. , Photographer: Alexi J. Rosenfeld/Getty Images

Two New York City Police Department officers were shot in Harlem on Friday, one fatally. Officer Jason Rivera, 22, was killed after 10 to 15 shots were fired when he and other officers responded to a 911 call from a woman who said she was in a dispute with her son. The second officer is in critical condition.

Mayor Eric Adams called it an attack on the city of New York.

Saturday marks the anniversary of the Supreme Court’s 1973 ruling of Roe v. Wade, which legalized abortion nationally. Soon, a conservative-majority Supreme Court will rule on whether a Mississippi ban on most abortions after 15 weeks of pregnancy is constitutional.

Pro-choice advocates worry that this could be the last anniversary of the Roe v. Wade decision. Anti-abortion supporters called on the Supreme Court to overturn the court decision on Friday at the 49th annual March for Life rally.

Mars Inc. updated M&M mascots with the goal “to reflect the more dynamic, progressive world that we live in,” according to a company press release. The green M&M has lost its “sexy” boots and will sport sneakers. Likewise, the brown M&M will wear lower block heals, ditching high stilettos and the orange M&M “will acknowledge his anxiety.”

Ian Alexander Jr., only child of actress Regina King has died at the age of 26 from a suicide, People reported. “Our family is devastated at the deepest level by the loss of Ian,” King said in a statement to People. “He is such a bright light who cared so deeply about the happiness of others.” Alexander Jr., who was a DJ, turned 26 on Wednesday.