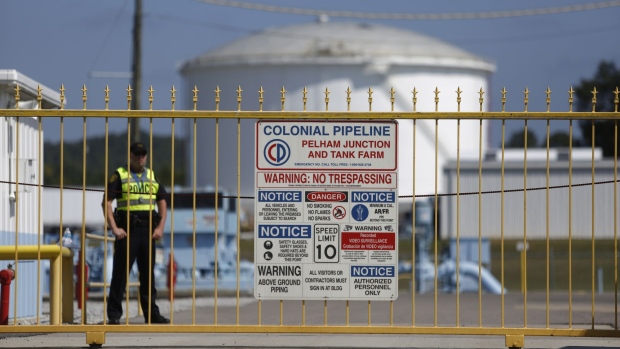 A police officer stands guard inside the gate to the Colonial Pipeline Co. Pelham junction and tank farm in Pelham, Alabama, U.S., on Monday, Sept. 19, 2016. Customers buying gasoline at grocery stores and other independent retailers may pay more than those shopping at name-brand outlets after the biggest gasoline pipeline in the U.S. sprung a leak in Alabama on Sept. 9. Colonial Pipeline Co. has proposed restarting the line on Sept. 22, according to the Alabama Emergency Management Agency. , Bloomberg

(Bloomberg) -- Colonial Pipeline is working to restore operations after a cyber-attack prompted the company to take its systems offline, threatening the supply of refined petroleum products to gas stations in major cities on the U.S. eastern seaboard.

A falling Chinese rocket probably won’t cause any damage when it returns to Earth, the country’s foreign ministry said, in an attempt counter U.S. concerns about the spacecraft’s uncontrolled re-entry.

Elon Musk is set to host NBC’s Saturday Night Live on May 8. The show’s choice to host the chief executive of SpaceX and Tesla Inc. has drawn criticism and some pushback from its own cast members, the New York Times reported.

Nina Turner, an Ohio Democrat running for a seat in the House of Representatives, is trending on Twitter after her opponent Shontel Brown launched an ad saying Turner’s been critical of Biden.