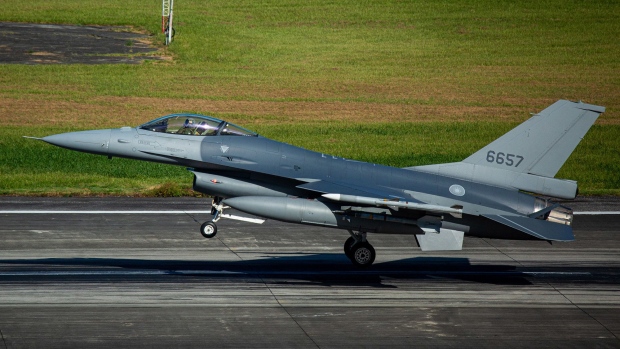 HUALIEN, TAIWAN - AUGUST 06: A Taiwanese F-16 Fighting Falcon fighter jet lands at Hualien Air Force Base on August 06, 2022 in Hualien, Taiwan. Taiwan remained tense after Speaker of the U.S. House Of Representatives Nancy Pelosi visited earlier this week, as part of a tour of Asia aimed at reassuring allies in the region. China has been conducting live-fire drills in waters close to those claimed by Taiwan in response. (Photo by Annabelle Chih/Getty Images) , Photographer: Annabelle Chih/Getty Images AsiaPac

Taiwan said China’s military drills on Saturday appeared to be simulating an attack on its main island, as Chinese warplanes and warships crossed the strait’s median line in a continued show of force.

China is engaging in increasingly destabilizing action, US Secretary of State Antony Blinken told reporters on Saturday. China is carrying out its most provocative military drills in decades in the wake of House Speaker Nancy Pelosi’s trip to Taiwan this week.

Indiana’s governor signed a law instituting a near-total ban on abortion, making it the first state in the nation to draw up and pass new legislation restricting access to the procedure since the Supreme Court overturned Roe v. Wade. The move has met with strong opposition, including from some of the state’s largest corporate employers.

In the UK, Archie Battersbee, a 12-year-old boy who was at the center of a legal battle to prevent his life support treatment being removed, has died in the Royal London hospital.

A last-ditch plea to the European Court of Human Rights to intervene in the case was rejected late Friday, following a UK High Court ruling that he must remain at the hospital rather than be transferred to a hospice to die. Battersbee had been in a coma for four months after what his mother said was the result of him choking following a challenge on social media.

A Texas jury unanimously ordered conspiracy theorist Alex Jones to pay $45.2 million in punitive damages to the family of a six-year-old boy who was shot to death in the 2012 massacre at an elementary school in Newtown, Connecticut. “I am asking you to take the bullhorn away from Alex Jones and all others who believe they can profit off fear and misinformation,” plaintiffs’ lawyer Wesley Ball said during closing arguments.

Jones conceded under oath earlier that the massacre was “100% real.” During the trial, Jones’s legal counsel mistakenly gave his cell phone texts to the parents’ legal team and the judge presiding over the case on several occasions admonished Jones for not being truthful during his testimony.

Davidson has been in Australia filming a movie, as Kardashian raises her four children with Kanye West. A source told E! News that their schedules and distance “made it really difficult to maintain a relationship.” Their relationship attracted much attention, for the full-glare celebrity allure, their age difference (she’s 41 and he’s 28) and that so many people hated themselves for caring but still did and had opinions about Davidson’s love tattoos.