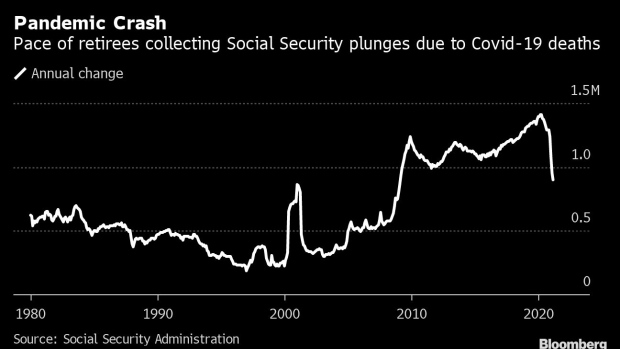 (Bloomberg) -- The rate of growth in retired Americans who collect Social Security has slowed down sharply, and the drop may be due in part to the disproportionate number of deaths from Covid-19 among the elderly.

The number of people who received retirement benefits from the Social Security Administration rose 900,000 to 46.4 million in March, the smallest year-over-year gain since April 2009.

While the Office of the Chief Actuary at the government agency said it is still too early to assess the impact from Covid-19, the year-over-year change appears to reflect excess deaths. About 447,000 people who died from the virus were 65 or older, according to data from the Centers for Disease Control and Prevention, or about 80% of total deaths.

The number of Social Security beneficiaries has risen in the past decade as baby boomers -- the large cohort born between 1946 and 1964 -- started to reach retirement age. Usually, during economic downturns, many are forced into retirement due to job losses, which adds to the retiree pool.

Other factors can have an impact on the numbers. In the early 2000s, the bump in beneficiaries was likely tied to the Senior Citizens’ Freedom to Work Act signed into law in April 2000, according to Teresa Ghilarducci, an economics professor at the New School for Social Research in New York. The law reduced penalties for beneficiaries who continued to work. The monthly data show 300,000 people claiming Social Security in May 2000.

The pandemic created a unique situation in 2020. While surveys show that many are retiring or planning to retire earlier than they once thought, deaths are removing hundreds of thousands of beneficiaries from Social Security rolls.

U.S. life expectancy plunged by a full year in the first half of 2020, the biggest drop since World War II, to 77.8 years from 78.8 in 2019, according to provisional data from the National Center for Health Statistics.