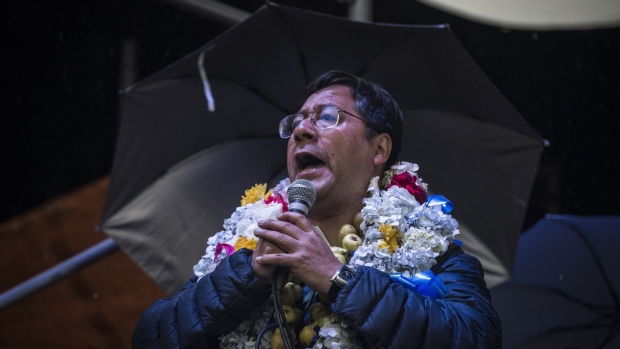 (Bloomberg) -- Luis Arce, the socialist candidate leading Bolivia’s election race, says he’ll seek to renegotiate billions of dollars in loans with multilateral lenders if he wins, while avoiding a default on the country’s bonds.

“We are proposing to talk to the creditors to either forgive the debt, or negotiate the payment of capital and interest from 2020-2021,” Arce said in an interview on Thursday, adding that he will keep paying the nation’s $2 billion in international bonds and avoid a default as seen in Argentina.

Bolivia is forecast to suffer its deepest economic slump since the 1980s this year, and is also in severe political disarray. One of Latin America’s poorest countries, it has been without an elected leader since President Evo Morales quit and fled the country in November amid violent protests.

The vote to replace him has been postponed twice due to the pandemic.

Arce said he would reach out to the Inter-American Development Bank, the World Bank and development bank CAF to seek easier loan terms amid the current crisis.

Arce said a deal to cut debt payments would help defend the currency peg, which he helped introduce as Morales’ finance minister. The central bank has burned through about $8 billion over the last five years -- more than half its international reserves -- to keep the boliviano from weakening.

Arce said it wouldn’t be appropriate to adjust the exchange rate, which has been at around seven per dollar for more than a decade, but that this may depend on whether Bolivia’s neighbors oversee further devaluations in their currencies. The Argentine peso and the Brazilian real have weakened the most in emerging markets over the last year.

A poll published this month by Pagina Siete newspaper showed Arce with 24% support, compared to 20% for former president Carlos Mesa and 16% for President Jeanine Anez, who took power after Morales resigned.

The first round of voting for president and congress is now scheduled for Oct. 18, with a possible runoff on Nov. 29. Arce would be likely to lose in the second round as anti-socialist voters unite behind a single candidate, according to a report this month by Eurasia Group.

Arce, who studied at the University of Warwick in England, oversaw one of Latin America’s fastest growth rates as finance minister from 2006 to 2017. At first this performance was underpinned by rising revenues from natural gas exports, but when gas prices fell in 2015, the government ramped up public spending to support the economy, and the current account surplus turned into a deficit of more than 5% of gross domestic product.

The three main credit ratings agencies have all cut Bolivia deeper into junk over the last year. Reserves have been relatively stable in recent months at around $6.5 billion, but Fitch analyst Todd Martinez said this reflects factors such as the rise in value of the central bank’s gold, and a temporary slump in imports.

A renegotiation with multilateral creditors wouldn’t be considered a default, though could affect the nation’s rating by signaling broader financial stress, Martinez said, in reply to written questions.

(Adds analyst forecast for second round in 11th paragraph. An earlier version of this story corrected Arce’s poll number in the 10th paragraph.)