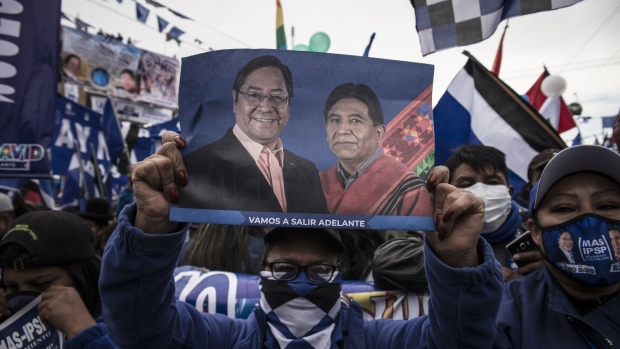 (Bloomberg) -- Bolivia’s socialists are seeking to retake power in elections this Sunday a year after their leader Evo Morales was ousted and driven into exile.

Morales’s ally Luis Arce, a U.K.-educated economist, is leading in polls, but needs to avoid a run-off vote in which his opponents can unite behind a single candidate.

His main rival is former President Carlos Mesa, who came second to Morales in last year’s chaotic election, which led to mass unrest, accusations of fraud and the head of state fleeing the country.

On Thursday, queues formed at some supermarkets and gas stations in the capital La Paz, as people stocked up in case of fresh disturbances.

The landlocked Andean nation of 11.5 million people is enduring its deepest economic slump on record, as well as political disarray since it has been without an elected leader for a year. The vote was twice delayed due to the pandemic.

The main credit ratings agencies have cut Bolivia ever deeper into junk since last year’s election, citing political risk and shrinking dollar reserves as they downgraded the country a total of six times between them. The economy, one of the poorest in the Americas, will contract 7.9% this year, according to a forecast from the International Monetary Fund.

Arce says he would seek to renegotiate billions of dollars in loans with multilateral lenders such as the Inter-American Development Bank and the World Bank if he wins, while avoiding a default on the country’s bonds. Both the main candidates have pledged to defend Bolivia’s currency peg of around seven per dollar.

Arce, 57, is popular among indigenous Bolivians, and people in rural areas. He has pledged to adhere to the economic model from Morales’s 14 years in office, which was characterized by rising welfare spending and redistribution of profits from natural gas sales.

The 67-year-old Mesa, a former journalist, says he wants to attract foreign capital to the country’s energy and mining sectors and make the legal system more investor-friendly.

Investors in the nation’s sovereign dollar bonds would “react favorably” to a win for Mesa, but their enthusiasm will soon cool if he can’t forge a ruling coalition in congress, said Eurasia Group analyst Risa Grais-Targow.

Under Bolivian election rules, a candidate can win in the first round with just 40% of the vote, provided there’s a margin of more than ten percentage points over the runner-up. In recent weeks two candidates, including interim President Jeanine Anez, pulled out for fear that Arce might triumph over his divided opponents, allowing his socialist party to retake power.

A poll published last week by “Your Vote Counts,” an alliance of universities, media and religious organizations, showed Arce leading with 33.6% of first-round voting intentions compared to 26.8% for Mesa and 13.9% for a third candidate, Luis Fernando Camacho.

That would mean a runoff vote between Arce and Mesa on Nov. 29. This would favor Mesa, since supporters of other anti-socialist candidates will be likely to vote against Arce in this scenario.

As finance minister from 2006 to 2017, Arce oversaw one of Latin America’s fastest growth rates, but his task was made easier by strong revenues from Bolivia’s natural gas exports and his party’s large majority in congress. If he wins Sunday, he’ll probably have to govern without either of these advantages.

Polls are open from 8 a.m. to 5 p.m. and preliminary results are expected Sunday evening.