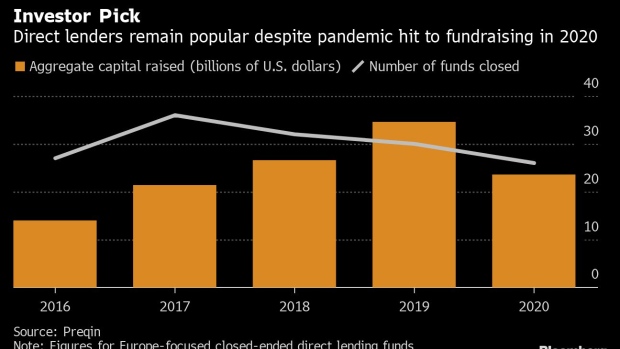 Lights illuminate the Arc du Trimophe and the Champs Elysee as seen from the La Defense business district in Paris, France, on Thursday, Jan. 21, 2021. The shift of jobs and assets to Paris after Brexit will accelerate this year, providing Europe with an opportunity to strengthen its own financial infrastructure, according to Bank of France Governor Francois Villeroy de Galhau. Photographer: Benjamin Girette/Bloomberg , Bloomberg

(Bloomberg) -- Investor demand for socially responsible projects is slowly pushing its way into Europe’s private credit markets, kicking off a shift in a booming area of company finance.

Linking loan terms to environmental, social and governance goals is relatively established in investment-grade corporate debt, but still comparatively rare in the $850 billion universe of alternative credit. Barings LLC and Tikehau Capital SCA, so-called direct lenders that provide financing to mid-size firms, are among those now embracing such packages.

That may just be the start as more lenders realize that they can burnish their credentials with investors that are becoming ever more discerning. If others follow suit, it would further deepen the integration of climate change into the world of finance, where it’s already being felt in everything from mortgages to credit risk to central banking.

“They might have the best returns in the world but if they don’t think about ESG they are not going to get recommended or see investment from us,” said David Scopelliti, global head of private credit at Mercer LLC, which manages more than $320 billion. “There are definitely managers that have fallen out of the funnel because they don’t have strong -- or indeed any -- systematic ESG incorporation in their investment process.”

Direct lenders charge more than banks for financing promising speed, privacy and flexibility in return, and it is that premium that has attracted a raft of new investors over the last decade. Lenders will need to see tangible benefits from ESG-linked deals for these initial transactions to become a trend.

The price cut is tied to targets that make genuine demands of the company, including a minimum proportion of women in the management team, a target that rises each year.

French private equity firm Eurazeo SE already has financed two buyouts this way with a third under negotiation. One of the packages was to fund the acquisition late last year of French intellectual property software firm Questel SAS. Under the terms, Questel can trim the margin on the 500 million-euro ($606 million) financing for the buyout by meeting reporting requirements such as measuring its fossil fuel usage.

“This is a real way we can put in ESG metrics at the company level,” said Alice Foucault, a managing director at Barings, which led the club of direct lenders for the transaction. “It’s not a significant margin reduction but it’s something that can make a difference.”

In Europe, private credit grew to $259 billion as of March 2020, of which $142.7 billion was in direct lending. That’s a near sixfold increase in a decade.

But the generally smaller firms targeted by direct lenders aren’t usually subject to the reporting requirements of the bigger businesses that have done ESG financing up to now. That means a key test for lenders will be to prove that the criteria written into loans are effective and not just there to appear socially conscious, according to Scopelitti.

“From a risk perspective, we are making sure we are going with the winner of the class,” said Cecile Mayer-Levi, head of direct lending at Tikehau, which has done six ESG-linked loans so far. “In three or four years, we will see if these companies have been out-performing.”

Even with the challenges, Stephane Bostyn, director and head of capital markets, financing and treasury at Eurazeo, says the direction for the industry is clear.

“Previously, the market was not really ready for this, lenders could not accept a negative impact on their margin,” he said. But “it will be the route taken by everybody in two or three years.”