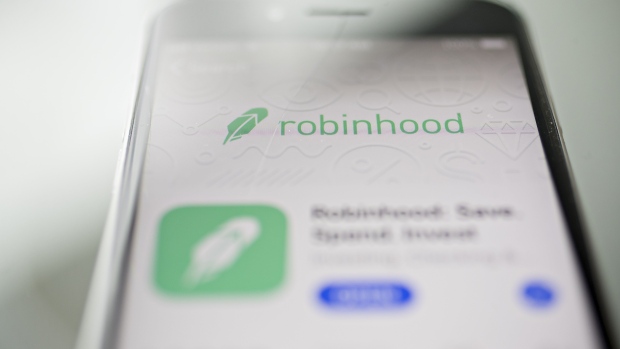 The Robinhood application is displayed in the App Store on an Apple Inc. iPhone in an arranged photograph taken in Washington, D.C., U.S. , Bloomberg

(Bloomberg) -- It used to be the ultimate Wall Street insider deal: Buy into the latest hot company before its shares start trading.

Now, at least two retail brokerages are looking at giving their customers early access to initial public offerings and the opportunity to buy shares at the same time as professional asset managers.

On Friday, Social Finance Inc., the online lender that plans to go public, said it would give clients with more than $3,000 in their accounts the ability to invest in IPOs. Robinhood Markets is building technology that would let its users do the same, Reuters reported Thursday.

The changes would mean potentially millions more dollars competing for stakes of companies about to go public, a boon for U.S. Inc., as well as the bankers behind the deals. It could also add to what some fear is an already frothy market, with valuations being driven by retail sentiment rather than fundamentals.

Neither SoFi nor Robinhood detailed what regulators have said about their plans. Investing early in an IPO can mean outsized gains, but it carries more risk. Still, the companies have pitched themselves as bringing the capital markets to the masses.

“Fintech largely has a populist, disruptive mission and so this is right in their DNA,” said Eric Balchunas, an analyst at Bloomberg Intelligence. “As opposed to letting ‘the man’ run it, they want to reward their customers and the little guy.”

Balchunas added that risks of pre-IPO investing should be clearly disclosed to retail investors, should such arrangements materialize.

SoFi, which gained popularity by refinancing student loans, plans to go public by merging with a blank-check company in a transaction that values the firm at about $8.7 billion.

Its early years helped the firm attract a customer base of young, highly paid white-collar professionals, which SoFi refers to as “members.”

“Gaining access to primary offerings is another way to diversify your portfolio that has previously been restricted to a select few,” SoFi Chief Executive Officer Anthony Noto said in a statement.