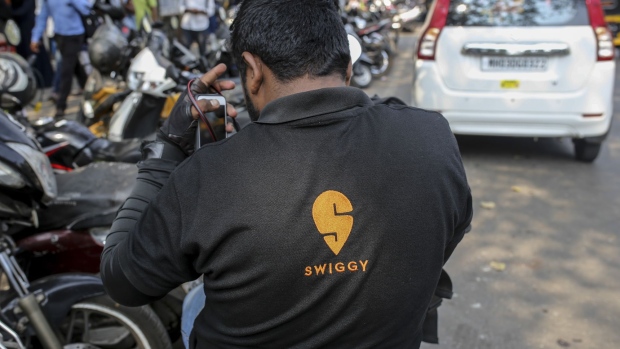 A food delivery rider for Swiggy, operated by Bundl Technologies Pvt., sits on a motorcycle in Mumbai, India, on Monday, Feb. 3, 2020. Indian Prime Minister Narendra Modi’s government plans to allow foreign investors greater access to short-term and long-term government securities in a bid to tap money being poured into passive funds operated by firms such as BlackRock Inc. , Bloomberg

While Swiggy didn’t disclose its valuation publicly, the round values the company at $10.7 billion, according to people familiar with the matter. The round comes six months after the Bangalore-based startup raised $1.25 billion.

Backed by the likes of SoftBank Group Corp., Swiggy is among a slew of Indian startups disrupting traditional industries as more consumers venture online. It competes with fellow unicorn Zomato Ltd., which went public last year in a $1.3 billion initial public offering, and the food-delivery arm of Amazon.com Inc.’s India unit.

While Swiggy’s food-delivery business has almost doubled in gross order value in the past year, the startup is also expanding its Instamart grocery service. That now operates in 19 cities across the country.

Swiggy wants to lead the emerging quick grocery market, which typically means delivery within 10 to 30 minutes. Instamart is set to reach an annualized gross merchandise value run rate of $1 billion in the next three quarters, the company said.

“Our goal is to make Swiggy the platform that 100 million consumers can use 15 times a month,” Sriharsha Majety, co-founder and chief executive officer of Swiggy, said in the statement.

The company was founded in 2014 and connects users with over 185,000 restaurants.