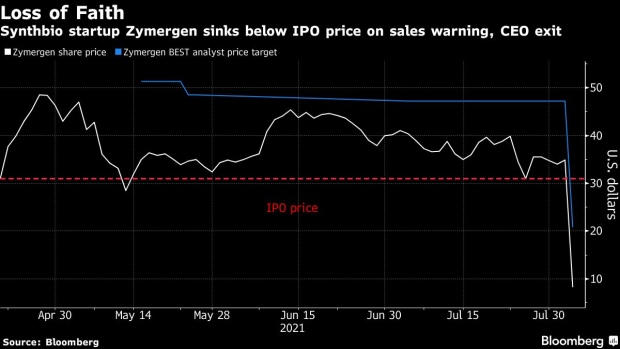 Shares of the firm tumbled as much as 77%, erasing more than $2.6 billion in market value, after Josh Hoffman stepped down Tuesday as the company revealed it would have no sales this year and any revenue next year would likely be “immaterial.”

At least five of seven analysts following Zymergen and tracked by Bloomberg slashed their ratings after the company update, in which it also pulled its sales forecast after citing technical issues getting its product, Hyaline -- a bio-manufactured bendable screen -- made.

Emeryville, California-based Zymergen also threw cold water on its foldable screen’s potential market size, which it said was smaller and expanding less than initially expected. The company is reviewing its strategic plan and plans to cut expenses.

“The Board and management team are focused on resolving the underlying issues to ensure Zymergen moves forward as a stronger company with a compelling operating plan,” Jay Flatley, the interim CEO and former Illumina chief, said in a statement.

Some on Wall Street weren’t convinced. “With the rest of the product pipeline being early-stage, the disclosure of multiple fundamental problems with Hyaline -- at this late stage -- brings the entire pipeline into question,” HSBC’s Sriharsha Pappu said after cutting his rating to reduce and his price target to $8 from $42.

Zymergen, in an email to Bloomberg News, said it’s focused on re-establishing the credibility of the leadership team and the company.

“We recognize that this will not happen over weeks or months, but will require consistent quarter after quarter execution against a credible plan,” a spokesman said in the email.

“We have never been in this position, with a CEO change and significant revenue reset so soon post-IPO,” said JPMorgan analyst Tycho Peterson in a research note. “We do not make the decision lightly, but in the absence of visibility around a turnaround plan, ability to recruit a CEO and the revenue ramp, we are hard pressed to see near-term upside, notwithstanding our high regard for interim CEO Jay Flatley.”