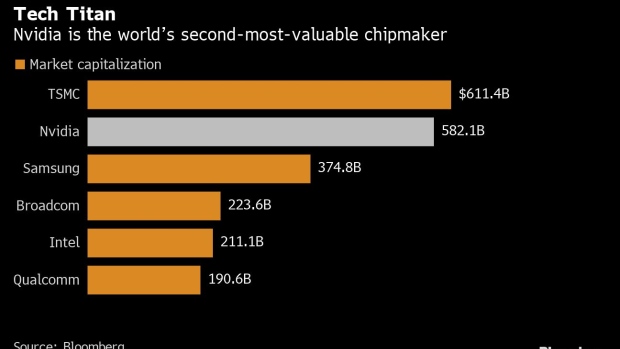 A SoftBank Corp. store at night in Tokyo, Japan, on Sunday, Nov. 7, 2021. SoftBank Group Corp. might see a return to investment losses when it reports earnings on Monday, as the impact of China’s regulatory crackdown begins to hit valuations in its Vision Fund portfolio. , Bloomberg

(Bloomberg) -- SoftBank Group Corp. dropped for a fourth straight day on Wednesday following a Bloomberg News report that Nvidia Corp. was quietly preparing to abandon its deal to buy Arm Ltd. from the Japanese investment giant.

Shares were down as much as 2.5% in morning trading in Tokyo.

Initially priced at $40 billion in September 2020, the purchase has risen in value with Nvidia’s shares and has been touted by SoftBank chief Masayoshi Son as a major windfall that would boost his company’s coffers and enable more prolific investment in technology startups. For Nvidia, Arm would be an invaluable strategic asset, as it designs the core processors that power practically every modern smartphone plus a growing array of more powerful electronics.

Nvidia Is Said to Prepare to Abandon $40 Billion Arm Deal

Regulators across Europe and the U.S. have voiced concern about the deal, adding to a chorus of objection from chip industry players. Companies like Qualcomm Inc., Intel Corp. and Alphabet Inc.’s Google have said that Nvidia can’t preserve Arm’s independence because it’s an Arm customer itself. Nvidia, the largest maker of graphics chips, competes with Intel in server processors and is expanding into new areas that would put it in direct competition with many other Arm licensees. The U.S. Federal Trade Commission sued to stop the transaction in December.

SoftBank shares hit a 52-week low after a 5.3% drop on Tuesday, driven by a global tech selloff by spooked investors. The company’s investment strategy makes it a proxy for the tech industry as a whole, so its fortunes are heavily dependent on the overall sector’s performance. Some within its ranks favor pursuing an initial public offering for Arm, according to people familiar with its deliberations.

“There has been scant progress with the procedures related to the acquisition,” Citigroup analyst Mitsunobu Tsuruo wrote after the report. “An IPO would delay the monetization of Arm assets, with uncertainty about the scale of the monetization also an issue.”