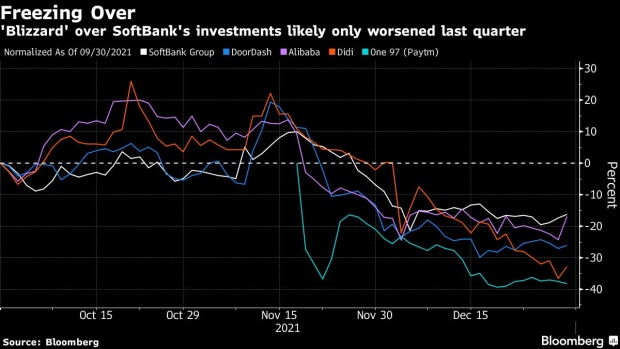 (Bloomberg) -- When Masayoshi Son last spoke to SoftBank Group Corp. investors three months ago, he said his tech conglomerate was in the middle of a “blizzard.” Conditions for the firm have only deteriorated since.

Some of its most high-profile investment bets have had a disastrous few months as an approaching tightening of the U.S. Federal Reserve policy turns investors sour on the type of tech startup bets his Vision Funds specialize in. To make matters worse, a long-awaited sale of chip designer Arm Ltd. to Nvidia Corp. looks set to collapse, while less than two weeks ago, Son lost another trusted lieutenant when operations guru Marcelo Claure stepped down due to a clash over pay.

Even a long-awaited resumption of buybacks has failed to lift SoftBank’s shares. Announcing the 1 trillion yen ($8.7 billion) repurchase three months ago, Son said that as a shareholder himself he was “delighted” with the buyback.

But no one will have been happy with SoftBank’s performance since then, with shares down more than 12%, worse than the Topix’s 5% slide in that time. Son will be under pressure to give some good news when he speaks to investors at a briefing following SoftBank’s third-quarter results on Tuesday.

While SoftBank’s returns are notoriously hard to estimate given the size of its private holdings, Kirk Boodry, an analyst at Redex Research who publishes on Smartkarma expects a $2.1 billion loss on its portfolio in the three months ended December, despite it bringing 10 companies to public markets in that time.

The damage ranges from India, where Paytm operator One97 Communications Ltd., the entity that operates the digital payments service Paytm, had a disastrous IPO, to the U.S. where DoorDash Inc. lost 28% of its value during the quarter and WeWork Inc. 14%. Didi Global Inc., which is preparing to delist in the U.S. and move to Hong Kong, lost 36% in the quarter. Most significantly, Alibaba Group Holding, SoftBank’s most valuable single investment, slid 16% in the three months.

While three months ago analysts were eagerly anticipating the resumption of share buybacks, the most recent repurchase hasn’t boosted shares, while recent results mean there may be little room to expand them further, analysts said.

“It is hard to see how Softbank can fund share purchases without selling assets,” Boodry wrote. “Shares will continue to be range-bound as Softbank appears unlikely to move more aggressively on buybacks.”

There was one recent positive sign. Over the weekend, Alibaba registered one billion American depositary shares that hadn’t been registered before, suggesting SoftBank may intend to sell some of its shares, Citigroup Inc. analysts including Alicia Yap wrote in a note. SoftBank’s stock rose as much as 5.4% in Tokyo, while Alibaba’s Hong Kong shares slid as much as 4.7%.

In the past, Son has been keen to snap up his own firm’s shares when they seemed undervalued compared to his preferred metric of net asset value. Even that is likely to have declined further, however, Jefferies analysts Atul Goyal and Shingo Ito estimated in a note last month. They expect the figure to have dropped from around $185 billion to around $130 billion as of the end of January.

However, that still means shares are trading at a significant discount to the net asset value, they noted, expecting net asset value per share of around 10,700 yen as of the end of the last quarter, versus its 5,388 yen share price in Tokyo at the morning close on Monday.

SoftBank will announce earnings at 3 p.m. Tokyo time on Tuesday, with Son to brief at 4:30 p.m.