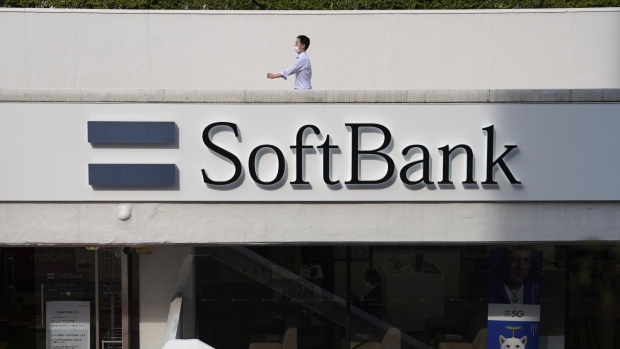 A pedestrian wearing a protective face mask walks near a SoftBank Corp. store in Tokyo, Japan, on Friday, Aug. 7, 2020. After reporting record losses in May and warning the coronavirus outbreak could be as devastating as the Great Depression, SoftBank Group founder Masayoshi Son is already poised to declare a recovery. Photographer: Toru Hanai/Bloomberg , Bloomberg

(Bloomberg) -- SoftBank Group Corp. sold the biggest yen note in the Japanese corporate bond market this year, continuing a global funding spree by the company as it faces hefty debt redemptions in the next six months.

Billionaire Masayoshi Son’s technology conglomerate priced on Friday a 450 billion yen ($4.1 billion) subordinated bond targeting individual investors at 2.4%, together with a 50 billion yen note for institutional investors, according to filings. The company has about 1.2 trillion yen of bond repayments due in its home market before the end of February, including planned early redemptions, according to data compiled by Bloomberg.

SoftBank is having one of its busiest years ever in global issuance markets, and raised more than $7 billion in a debt offering across dollars and euros in June. The company last month reported a slump in net income to 761.5 billion yen in the three months ended June 3O after the value of investments in public holdings such as Coupang Inc. declined.

SoftBank is selling yen debt after a drop in funding costs spurred a rush among Japanese firms to sell bonds, with deals last month surging to the most for any August on record at 953.3 billion yen, according to Bloomberg-compiled data. Average yield premiums on Japanese corporate notes dropped to 27 basis points this month, their lowest since 2015, Nomura BPI data show.