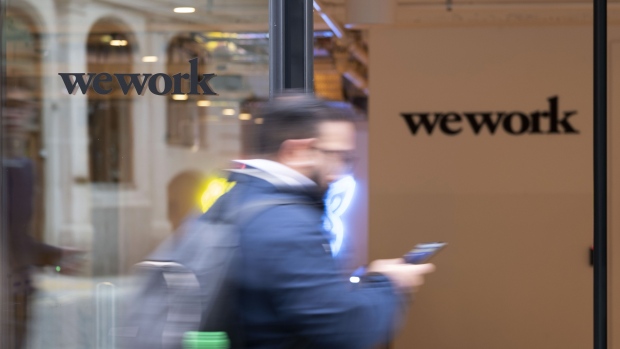 A pedestrian walks past the entrance to a We Work co-working office space. Photographer: Bryn Colton/Bloomberg , Bloomberg

SoftBank Group Corp. is plowing US$1.1 billion into WeWork to help it weather the coronavirus pandemic, according to a staff memo obtained by Bloomberg News.

The new financing, “another sign of SoftBank’s continued support for our business,” boosts the New York-based company’s available cash and unfunded cash commitments to US$4.1 billion, according to Chief Financial Officer Kimberly Ross’s memo, the contents of which were confirmed by a spokeswoman. The investment is in the form of senior secured notes.

“COVID-19 has had an impact on our business,” Ross wrote. While WeWork’s second-quarter revenue rose 9 per cent to US$882 million from a year earlier, that marked a decline from its US$1.1 billion haul in this year’s first three months. The company’s membership base fell 12 per cent to 612,000 in the second quarter from that prior period.

One bright spot: “We’ve seen renewed demand from leading enterprise companies as they look for flexibility on a global scale,” Ross wrote. The proportion of enterprise members was 48 per cent in the second quarter, a slight increase from the first.

The company has been focused on whittling costs after its initial public offering was shelved last year. Its cash burn -- or free cash outflow -- was US$671 million in the quarter, due to US$116 million in non-recurring restructuring expenses which included severance linked to layoffs. Still, the cash burn was less than the US$1.3 billion in WeWork’s peak outflow in the fourth quarter of 2019, Ross noted.

The firm recently exited leases for would-be locations in Baltimore’s Harbor Point and at 149 Madison Avenue in Manhattan. It currently has 843 locations in 150 cities across 38 countries.

The new investment from SoftBank comes after its roughly US$100 billion Vision Fund recorded billions in losses after writing down WeWork’s valuation to US$2.9 billion, down more than 90 per cent from its US$47 billion peak. SoftBank has invested more than US$10 billion in WeWork.

Last month, We Co., the parent of WeWork, asked a judge to dismiss a lawsuit brought by two of its board members against SoftBank for reneging on a US$3 billion offer to buy the co-working company’s closely held shares that was tied to additional debt financing.