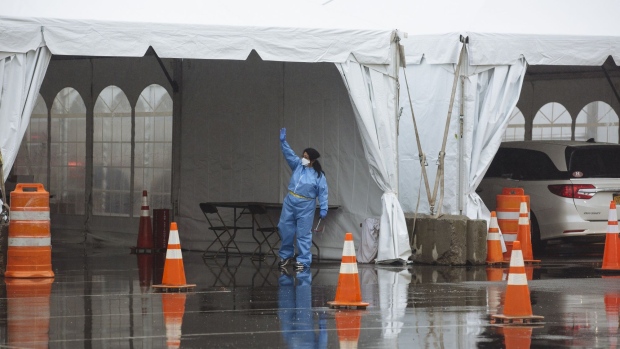 A health care worker in a protective suit gestures inside a six lane COVID-19 drive-through testing facility at Glen Island Park in New Rochelle, New York, U.S., on Friday, March 13, 2020. President Donald Trump plans to declare a national emergency on Friday over the coronavirus outbreak, invoking the Stafford Act to open the door to more federal aid for states and municipalities, according to two people familiar with the matter. Photographer: Angus Mordant/Bloomberg , Bloomberg

Opentrons Labworks Inc. was founded in Brooklyn in 2013 and was valued at $90 million only a year ago. Last summer, the company was instrumental in helping set up New York’s Pandemic Response Lab to alleviate massive testing delays in the city. Opentrons’s robots speed up the process by saving humans from having to carry out repetitive tasks themselves, helping to allow the city to test as many as 45,000 swabs a day now.

The pandemic has fueled investor interest in life-science and robotics firms -- industries that have been key to the Covid response, and are crucial for preventing future outbreaks. Robotics companies in the U.S. have brought in $4.3 billion in funding this year, more than double the same period last year, according to PitchBook Data. Life-science companies have raised a record $34.8 billion so far in 2021.

Opentrons sits at the intersection of these two industries, creating robots to help life scientists automate many of their experiments and processes.

In July 2020, Covid-19 tests were taking seven to 14 days to come back in New York and costing as much as $2,000. Opentrons’s process at the Pandemic Response Lab (PRL) reduced the window for results to as little as 24 hours and slashed the cost to less than $28. The PRL has also been at the forefront of virus sequencing in the U.S., spotting the delta mutation toward the end of April and discovering the first case of the South African variant in a New York resident. Sequencing the virus’s genomes for mutations is important to provide a picture of which variants are present and how widely they’re proliferating.

Opentrons has since tested 2 million New Yorkers and has set up additional Covid-19 hubs in Washington and Los Angeles. The hubs conduct “pool testing” for schools, grouping tests from students at a cost of about $1 per child and providing results by the next day, making the process affordable and efficient for large city systems such as New York’s. Pool testing is also available for government agencies, hospitals and businesses, and Opentrons is exploring opening labs in other communities as part of a government effort to get Americans back to work. President Joe Biden has issued an executive order requiring large private employers to mandate shots or regular testing.

“We see these labs as being a key part of the infrastructure for any pandemic response,” Chief Executive Officer Jonathan Brennan-Badal said in an interview. They allow Opentrons to rapidly deploy new tests, run them affordably, and sequence the positive cases to continue to track the emergence of new variants. “Biology opens the door to solve many of humanity’s grand challenges,” Brennan-Badal said in a separate statement. “For far too long, scientists and clinicians have been locked-in by slow, expensive, and overly complex lab solutions that underpin their work.”

Angela Du, a director at SoftBank Vision Funds 2, led the funding round after discovering Opentrons through her spouse, a research scientist who uses the company’s technology at work. Brennan-Badal says that’s how the company often sources investors. Opentrons has grown to support a community of moe than 1,000 scientists in 46 countries. That network allows Opentrons a first look at thousands of different customers’ innovations. When it sees a groundbreaking invention, Opentrons uses its robots to help bring it to the masses.

Khosla Ventures also participated in the funding and ex-Pfizer Inc. CEO Jeff Kindler is an investor. Opentrons also recently added Moderna Inc. co-founder Robert Langer to its team. Langer, who is also one of 12 Institute Professors at the Massachusetts Institute of Technology, leads the scientific advisory board of Opentrons subsidiary Neochromosome.

The addition of Langer points to Opentrons’s ambitions in the vaccine business, as well as drug development and treatments.