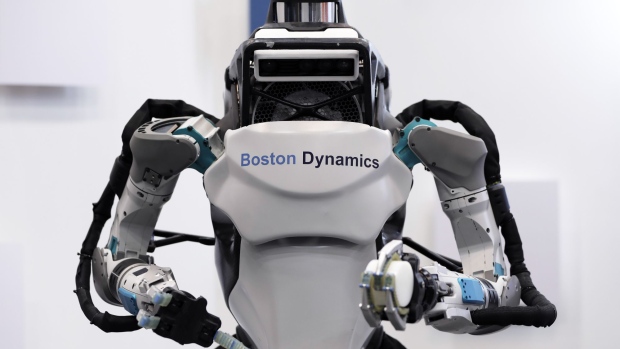 A Boston Dynamics Inc. Atlas humanoid robot is displayed at the SoftBank Robot World 2017 in Tokyo, Japan, on Tuesday, Nov. 21, 2017. SoftBank Chief Executive Officer Masayoshi Son has put money into robots, artificial intelligence, microchips and satellites, sketching a vision of the future where a trillion devices are connected to the internet and technology is integrated into humans. Photographer: Kiyoshi Ota/Bloomberg , Bloomberg

Proposed terms of the deal would give the South Korean automaker control of the robotics company in a transaction valued at as much as $1 billion, said one of the people, all of whom asked not to be identified because the discussions are private. The terms have yet to be finalized, and the deal could fall apart, said the people.

A sale of Boston Dynamics would mark another twist in the trajectory of a company that spun out of the Massachusetts Institute of Technology in the early 1990s and operated independently until Google bought it in 2013. It was sold again in 2017, that time to SoftBank.

At times, Boston Dynamics has functioned more like a research organization than a business, churning out machines that are technologically advanced and whimsical but unprofitable. That includes Spot, a maneuverable dog-like robot. Videos of its creations regularly rack up millions of views on YouTube; however, the company has said it is not currently making money.