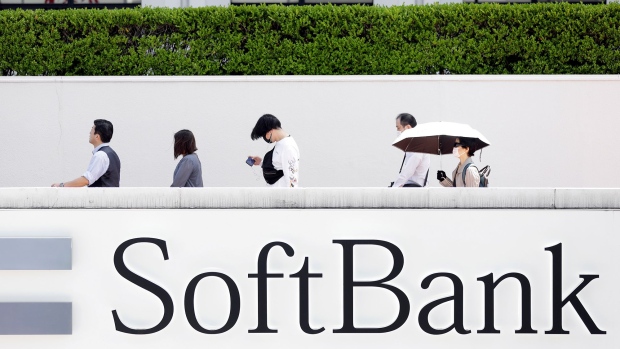 Pedestrians wearing protective masks walk past signage for SoftBank Corp. near a store in Tokyo, Japan, on Friday, May 15, 2020. , Bloomberg

SoftBank Group Corp. quietly sold an additional US$2.2 billion of its stake in Alibaba Group Holding Ltd. as part of the Japanese conglomerate’s fund-raising effort to pay down debt and buy back its own shares.

The deal, which includes a collar contract and call spread, is expected to be settled between May 2024 and June 2024. The details were disclosed on page 276 of SoftBank’s year-end financial filing released on June 25, but have not been previously reported. A SoftBank Group spokesman confirmed the details of the sale.

This step is the latest in an unwinding of a relationship between the two companies that spans two decades. SoftBank founder Masayoshi Son was an early backer of Jack Ma’s Alibaba and the Chinese e-commerce giant remains his most successful investment by far. In early 2000, Son invested $20 million into the then-unknown web portal connecting Chinese manufacturers with overseas buyers, a stake that is now worth more than $150 billion. Son and Ma stepped down from each other’s boards last month.

SoftBank is in the process of offloading 4.5 trillion yen (US$42 billion) of assets to bankroll stock buybacks and slash debt to reassure investors after a swoon in its shares earlier this year. In addition to Alibaba, the company is selling a stake in T-Mobile US Inc. for as much as $20 billion and stock in its domestic telecom unit.

SoftBank shares have recovered as the company has sold assets and bought back stock. The stock has climbed about 140 per cent from their low in March and hit the highest level in two decades this month.