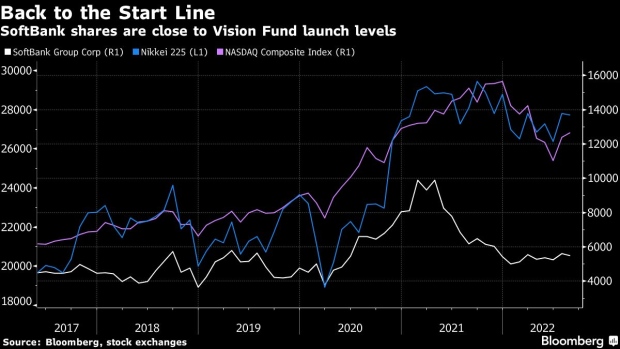 Global stock prices continued their slide during the June quarter, hurting valuations of SoftBank’s key public holdings like Uber Technologies Inc. and Coupang Inc. The Nasdaq 100, a barometer for tech heavyweights, lost 22% during the period, capping its worst such performance since the global financial crisis in 2008. It’s the most serious setback for founder Masayoshi Son since he repositioned his company to focus on tech investments.

“The loss is the biggest in our corporate history and we take it very seriously,” Son said during a press conference after the results.

Asked about what lessons he has learned from the experience, Son said, “There are too many to count.”

Son said the Vision Fund will have to scale back after the losses. Rajeev Misra, the long-time head of the Vision Fund, is stepping away from most of his responsibilities and will start his own investment fund.

SoftBank said that, among its still-private companies, their fair value dropped in “a wide range” because of weak performance, recent funding rounds and declines in the value of comparable public companies. Shares of ByteDance Ltd., the Chinese parent of TikTok, have slumped more than 25% since last year in private markets, while Swedish buy-now-pay-later company Klarna Bank AB had its valuation slashed 85% in a recent funding round compared with June 2021, Bloomberg News has reported.

“Valuations will probably get worse before they get better,” said Redex Research’s Kirk Boodry, who publishes on Smartkarma.

SoftBank and Son are now trying to wait out a slump in chip-related stocks so that it can grab a return on its $32 billion purchase of chip designer unit Arm Ltd. through an initial public offering. The Japanese billionaire has said he aims to make the offering the biggest-ever for a chip company.

Shares in SoftBank itself are close to where they were five years ago, before the launch of the Vision Fund, despite a series of aggressive buyback programs. Most recently, it announced a 1 trillion yen buyback program through September. That, as well as expectations that the company may launch another buyback program later this year, have helped its shares gain about 5% this year.

SoftBank said such measures had resulted in a large improvement in its loan-to-value ratio, a key metric Son tracks.

The company also exited its holding in Uber Technologies Inc.