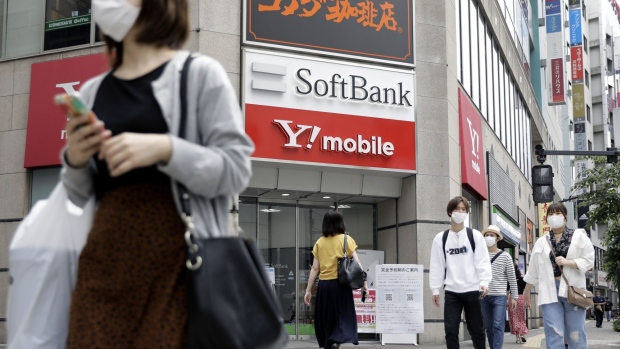 Pedestrians wearing protective masks cross a road in front of a SoftBank Corp. store in Tokyo, Japan, on Friday, May 15, 2020. Bloomberg

SoftBank Group Corp. bought back about US$2.7 billion of its own shares in June, helping push the stock to its highest in two decades.

The company bought a total of 54,859,300 shares paying 290 billion yen, SoftBank said in a statement Friday. The acquisitions tapped out the 500 billion yen buyback announced in March and used about 20 per cent of a similarly-sized repurchase slated to run through next March.

The Tokyo-based company led by founder Masayoshi Son booked a record 1.36 trillion yen operating loss for the year ended March 31. Son’s response was to speed up plans to sell 4.5 trillion yen of assets to reduce debt and bankroll record share buybacks. SoftBank has already lined up a third repurchase package and pledged to spend an additional 1 trillion yen on buying back stock this fiscal year.

SoftBank closed little changed at 6,267 yen on Friday. The stock has more than doubled from its coronavirus low in March, adding close to US$70 billion in market capitalization.