SoftBank Group Corp.’s Masayoshi Son says he is unhappy with how far short his accomplishments to date have fallen of his goals.

“The results still have a long way to go and that makes me embarrassed and impatient,” Son said in an interview with Nikkei Business. “I used to envy the scale of the markets in the U.S. and China, but now you see red-hot growth companies coming out of small markets like in Southeast Asia. There is just no excuse for entrepreneurs in Japan, myself included.”

Son built a US$13.8 billion personal fortune by transforming SoftBank into a global technology conglomerate and reaping massive returns from investments like Alibaba Group Holding Ltd. His US$100 billion Vision Fund also holds stakes in some of the world’s biggest technology startups, a portfolio that ranges from ride-hailing and genomics to vertical farms and satellites. But trouble at two of SoftBank’s marquee investments -- Uber Technologies Inc. and WeWork -- has cast a shadow of doubt over the Japanese billionaire’s track record just as he’s busy wooing investors for an even bigger fund.

“It only just began and I feel there is tremendous potential there,” Son told Nikkei Business. The strategy is to invest in companies that share his vision of a world being reshaped by artificial intelligence, he said.

Son has often said that he has a 30-year plan for SoftBank and that his vision extends as far out as 300 years into the future. But his company’s shares have been battered by more immediate concerns, now trading at close to 31 per cent lower than they were in April. 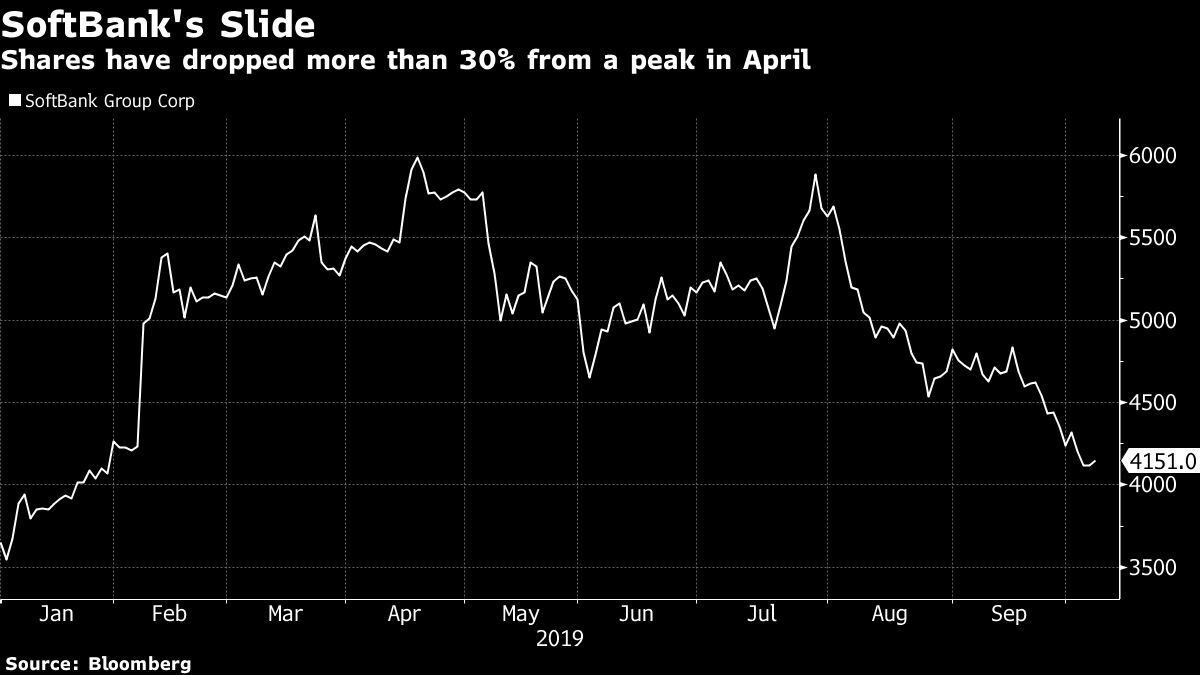 Uber’s share price has also suffered a more than 30 per cent drop from the level at which the company went public, raising questions about the rest of SoftBank’s ride-hailing portfolio, which includes China’s Didi Chuxing Inc., India’s Ola and Singapore’s Grab. WeWork, a co-working giant into which Son has poured almost US$11 billion, has had to delay what would have been one of the year’s biggest initial public offerings as the market balked at its inflated valuation and shaky governance. This one-two punch has helped erase the gains of SoftBank’s record US$5.5 billion buyback eight months ago.

WeWork and Uber may be losing money now, but they will be substantially profitable in 10 years’ time, Son said in the interview. At a private retreat for portfolio companies late last month he had a different message: become profitable soon. At the gathering, held at the five-star Langham resort in Pasadena, California, Son also stressed the importance of good governance. Just days later, SoftBank led the ouster of WeWork’s controversial co-founder Adam Neumann.

Son has long been known as a free-spending benefactor who encouraged startup founders to pursue their dreams even if it meant losing billions of dollars in the process. While the Nikkei interview focused mostly on Son’s disappointment with flagging entrepreneurial spirits in his home country, it did include a somewhat cryptic note of caution for SoftBank portfolio company heads.