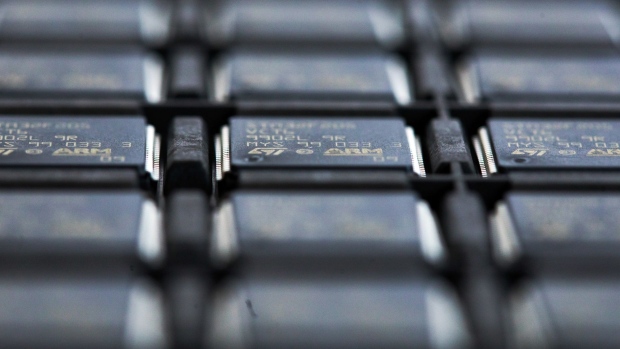 Masayoshi Son, chairman and chief executive officer of SoftBank Group Corp., speaking in Tokyo during a virtual earnings announcement, arranged in Naha, Japan, on Tuesday, Feb. 8, 2022. SoftBank Group said it plans an initial public offering for Arm Ltd. after Nvidia Corp. abandoned a proposed acquisition of the chip designer in the face of fierce opposition from regulators and customers. , Bloomberg

(Bloomberg) -- SoftBank Group Corp. hasn’t made a final decision on where to debut chip subsidiary Arm Ltd. though the Nasdaq remained the most likely venue for an initial public offering, Chairman Masayoshi Son said.

The Japanese investment giant is still considering its options and is in talks with bankers and lawyers to float Arm in the US and the UK, Son told shareholders Friday.

SoftBank is weighing the listing of some of its stake in the British chip designer on the London Stock Exchange, switching from an earlier plan to only use the US market, Bloomberg News has reported.

Arm, which SoftBank acquired in 2016, is based in Cambridge, England. Arm was one of the UK’s most important technology companies before the purchase and still has the majority of its operations there. An IPO that would list only in the US would be a blow to the UK government and capital market.