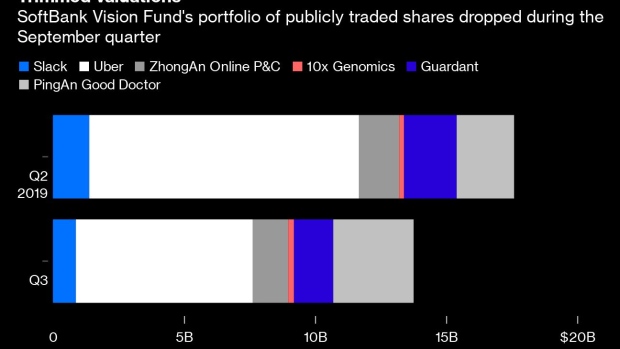 (Bloomberg Opinion) -- A disastrous three months for SoftBank Group Corp. may force its Vision Fund to write down at least $5 billion for the September quarter, Bloomberg News reported. That’s not the half of it. Literally.

There are bigger, deeper, and likely unrecoverable losses ahead for the world’s largest venture-capital fund. That the devaluation of its holdings might be as low as $5 billion, possibly as high as $7 billion, according to people familiar with the matter, indicates that the Japanese company has barely scratched the surface of what losses it will need to book on its stake in WeWork, let alone the rest of its portfolio.

All in all, $4.7 billion was lost across four publicly listed companies alone. Top of the list, the Vision Fund’s holdings in Uber Technologies Inc. dropped by $3.5 billion in the September quarter thanks to the ride-hailing company’s 34% share price slide. Slack Technologies Inc., another of Masayoshi Son’s celebrated investments, fell 38% during the same period for a loss of $504 million to the Vision Fund, the $100 billion investment vehicle controlled by SoftBank. Biotech company Guardant Health Inc. and China’s ZhongAn Online P&C Insurance Co. also declined.

Those losses were offset by an $894 million gain on one stock. China’s Ping An Healthcare and Technology Co., better known as PingAn Good Doctor, climbed 41% for the period, mitigating the fund’s losses on listed shares to around $3.9 billion.(1) Overall, the portfolio of listed shares, which includes the listing this month of Vir Biotechnology Inc., is down again this quarter.

To be clear: Those are just the revaluations we can track in public markets.

The elephant in the room is The We Co. — WeWork’s official name — which plunged from a $47 billion valuation just a few months ago to around $8 billion after SoftBank’s bailout this week. Its initial public offering has been withdrawn. As Bloomberg columnist Matt Levine summed it up: SoftBank has put in “an astounding total of more than $18.5 billion for a company it values at $8 billion.”

It will take creative accountants to avoid writing off the $10 billion such arithmetic suggests. But SoftBank has already said it doesn’t control WeWork, and thus can treat it differently. Even if we put aside that train wreck, there are more than 80 companies in the Vision Fund’s portfolio. Close examination is required.

Its largest and third-largest investees, by valuation, are also in the ride-hailing game  — a business which has yet to prove profitable. China’s Xiaoju Kuaizhi Inc., better known as DiDi, is worth $56 billion, according to CB Insights’ unicorn list, while Southeast Asia’s Grab Holdings Inc. is listed at $14.3 billion.

Maybe DiDi really is worth all that money, but the continued slide in shares of both Uber and Lyft Inc. make such a valuation a little hard to back up. Grab is arguably a little different since it has made the move beyond ride-hailing into food (like Uber) as well as payments and fintech. Grab’s new services aren’t yet proven to be profitable, but we could give the company a little more leeway when examining its underlying value.

SoftBank is reported to have been invested in China’s ByteDance, owner of popular short-video streaming service TikTok, at a $75 billion valuation, though curiously it’s not listed among the Vision Fund’s 83 portfolio companies. It might be the one investment that has the most traction given the service’s extreme popularity around the world, yet this current cooling of enthusiasm for high-flying unicorns means that figure probably deserves to be trimmed. That said, it’s possible this investment sits on the books of SoftBank, rather than the Vision Fund, so who knows how it will be accounted for.

A writedown of $5 billion to $7 billion on the Vision Fund will certainly hurt. But that’s just the start.

(1) The Vision Fund invested in 10x Genomics, which listed during the quarter. But the company's prospectus doesn't list SoftBank among shareholders with at least 5%, so I estimate gains during the period to be little more than $50 million. SoftBank declined to say how much it owned when I asked last month.