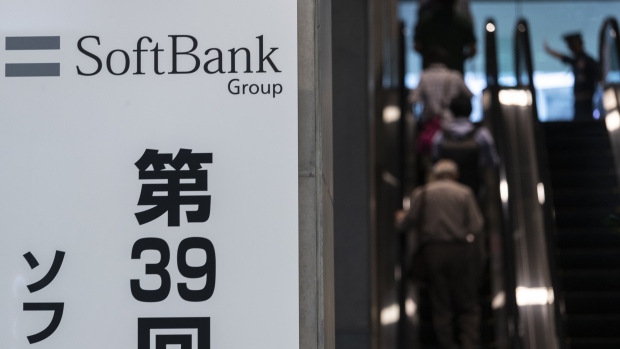 The entrance to the SoftBank Group Corp. annual general meeting in Tokyo. Bloomberg

SoftBank is planning to take a writedown of at least US$5 billion to reflect a plunge in the value of some of its biggest holdings, including WeWork and Uber Technologies Inc., according to people with knowledge of the matter.

The Tokyo-based parent of the US$100-billion Vision Fund, which began investing in 2017, is poised to unveil the writedown when SoftBank announces second-quarter earnings on Nov. 6, said the people, who requested anonymity because the matter is private. The writedown is being driven by the Vision Fund’s holdings in ride-hailing giant Uber and WeWork parent We Co., the beleaguered co-working company that SoftBank agreed this week to rescue, they said.

The tepid performance of ride-hailing stocks has influenced the way SoftBank is thinking about valuing its investments in the sector, the people said. The public markets have not been kind to either Lyft Inc. or Softbank-backed Uber, which has tumbled more than 25 per cent since its May initial public offering. That has led the Vision Fund to reassess its recorded valuations of other ride-hailing companies, such as Didi Chuxing and Grab Holdings Inc., said the people. Between June 30 and Sept. 30, the value of SoftBank’s 13-per-cent stake in Uber decreased by about US$3.5 billion, according to Bloomberg data.

The writedown could be as high as US$7 billion, but the amount has not yet been finalized and could still change, one of the people said. Representatives for SoftBank and the Vision Fund declined to comment.

The news comes as SoftBank courts prospective investors for its second Vision Fund, which it has said it hopes will be even bigger than the first. The original Vision Fund — in large part backed by SoftBank, Saudi Arabia’s Public Investment Fund and Abu Dhabi’s Mubadala Investment Co. — had made 83 investments by June 30, according to an August disclosure.

The scale of those bets was big enough to change the way the Silicon Valley startup ecosystem operates. The Vision Fund disclosure showed that the fund had made cumulative investments of US$71.4 billion, and had combined unrealized and realized gains from investments and related hedges of US$20.2 billion; a year-on-year jump from US$30.9 billion in investments and US$5.2 billion in cumulative gains.

Softbank Vision Fund’s sprawling portfolio spans numerous industries but has been dominated by transportation and logistics bets, with US$28.3 billion of its total investments dedicated to this sector as of June 30. These were held at a fair value of US$33 billion at that date. Its US$8 billion worth of real estate investments in companies including WeWork, Compass and Opendoor were marked at US$9.9 billion as of June 30. The Vision Fund’s exposure to WeWork is less than that of its parent, SoftBank.