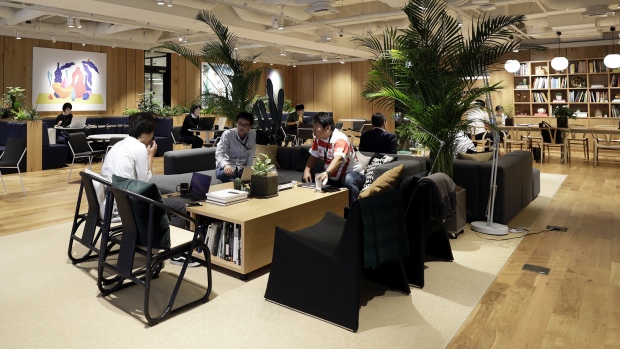 (Bloomberg) -- SoftBank Group Corp. is looking to take a controlling stake in WeWork, according to a person familiar with the matter. The deal is said to value the company at about $8 billion or less, said the person, who asked not to be identified discussing private deliberations.

The plan includes an offer to buy as much as $3 billion of stock from existing shareholders, the person said. The package is also expected to include $5 billion in debt financing.

WeWork had recently been considering two rescue packages -- one from SoftBank and another from JPMorgan Chase & Co. -- to keep it from running out of money as soon as next month.

The bailout underscores the rapid unraveling of the once-high-flying startup. This summer, WeWork appeared to be headed toward a rich initial public offering. The startup had amassed more than $10 billion in commitments from SoftBank. But public investors spurned the company, which lost $900 million in the first half of this year. As its estimated valuation cratered, WeWork last month ousted Chief Executive Officer Adam Neumann and, eventually, pulled its IPO paperwork.

The deal could give WeWork a reprieve as it scrambles to cut costs. The company has said it is looking to offload several of the companies it recently acquired, plans to shutter the elementary school located in its corporate headquarters in New York and even put its $60 million corporate jet up for sale.

--With assistance from Ellen Huet.

To contact the reporter on this story: Sarah McBride in San Francisco at smcbride24@bloomberg.net

To contact the editors responsible for this story: Mark Milian at mmilian@bloomberg.net, Anne VanderMey