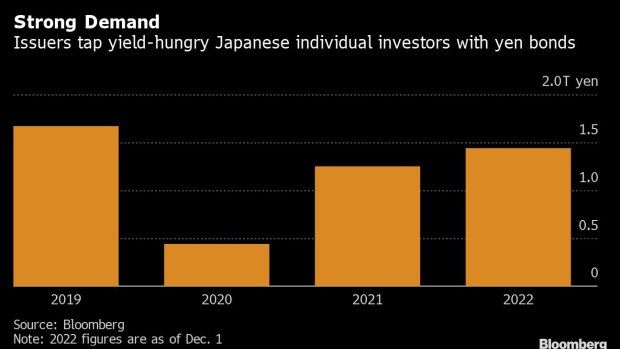 Billionaire Masayoshi Son’s firm raised 385 billion yen ($2.82 billion) from seven-year bonds with a coupon of 2.84%, according to a filing. That’s higher than the 2.48% it paid on 550 billion yen of seven-year subordinated notes sold to retail investors in January.

Both Renault SA and Rakuten Group Inc.’s credit card subsidiary are also set to sell such debt as soon as this week. Along with the SoftBank issuance, this would boost annual volumes of retail bonds in Japan to the highest in at least three years, according to data compiled by Bloomberg.

SoftBank has a strong brand name in Japan, which means it can take advantage of consumers’ appetite at a time when institutional investors remain wary over market risks.

“Most retail bond investors tend not to care about daily market fluctuations so much, so they would buy even if spreads may widen in the next one or two months,” said Kazuma Ogino, a senior credit analyst in Tokyo at Nomura Securities Co. “They have an investment capacity even when there is uncertainty in the market environment, so there are issuers targeting them.”

Retail bonds by companies offering well-known products and services are popular among individuals, especially because they offer higher yields compared to the rock-bottom rates at Japanese banks. Savings accounts at Mitsubishi UFJ Financial Group Inc., the country’s biggest lender, pay an annual interest rates of 0.001% to 0.002%.

SoftBank is regularly one of the biggest issuers in the Japanese domestic bond market and was able to turn to individual buyers even after its core Vision Fund segment posted a loss in the July-September quarter and S&P Global Ratings revised the company’s credit outlook to negative from stable.

Two other retail notes are likely to price on Friday. Rakuten Card Co. is marketing a 50 billion yen deal at 1.2%-1.8%, while Renault SA hopes to entice investors with yields of 2.5%-4.5% on its first such Samurai bond.