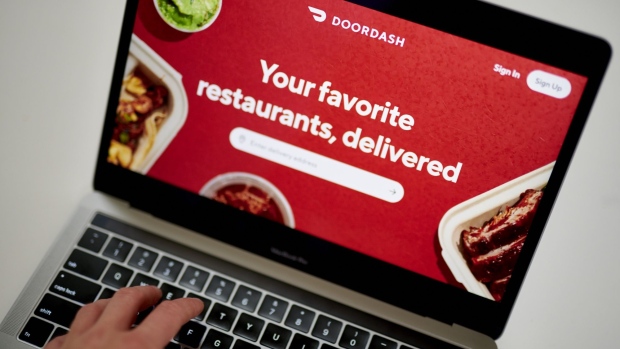 A DoorDash Inc. delivery person holds an insulated bag at Chef Geoff's restaurant in Washington, D.C., U.S., on Thursday, March 26, 2020. As the wheels of government turn too slowly for small businesses desperate for a piece of the $2 trillion U.S. relief package due to the coronavirus pandemic, restaurateur Geoff Tracy is using GoFundMe to raise money for 150 hourly workers at his American comfort food standby Chef Geoff's and other restaurants. Photographer: Andrew Harrer/Bloomberg , Bloomberg

(Bloomberg) -- The market for initial public offerings is once again supplying Masayoshi Son with the means to borrow billions of dollars on behalf of his first SoftBank Vision Fund.

Ranked as the biggest technology-investing vehicle ever, the fund arranged two margin loans last month, regulatory filings show. One is backed by almost all of its $15 billion stake in South Korean e-commerce giant Coupang Inc., and the other by an undisclosed number of shares from its $8.8 billion investment in online food-delivery service DoorDash Inc.

The loans will help fund distributions to investors, including sovereign wealth funds from Saudi Arabia and Abu Dhabi, and Son’s Tokyo-based SoftBank Group Corp., people with knowledge of the matter said. The Vision Fund and its successor, SoftBank Vision Fund II, have doled out $29.1 billion of distributions since inception, including $6.7 billion in the second quarter, according to company marketing materials.

The fund deployed a similar strategy in 2019, when it arranged to borrow roughly $4 billion by pledging stakes in three Silicon Valley companies that had recently gone public or were about to do so, including Uber Technologies Inc. It’s much easier to borrow against liquid assets.

“Compared to a year ago, their cash needs have gone up and the amount of securities they can use is also massively bigger,” said Kirk Boodry, an analyst at Redex Research in Tokyo.

Venture capital funds typically begin to unwind their stakes in a startup once the company conducts an initial public offering and creates a market for its stock, and then distribute the proceeds to their investors.

The Vision Fund is also pledging its entire stake in Auto1 Group SE, a Berlin-based online platform for buying and selling used cars, filings show. That stock is pledged as additional collateral for an existing loan, according to a person familiar with the matter.

The debt allows the Vision Fund to bolster its quarterly payout without having to sell Coupang stock, which has tumbled about 15% since the firm’s IPO in March. Borrowing against startup shares rather than selling them also allows SoftBank to avoid paying capital-gains taxes and to continue benefiting from any future appreciation in the stock, an approach that worked well with SoftBank’s stake in Alibaba Group Holding Ltd.

Shares of Alibaba climbed steadily for years after the Chinese e-commerce giant went public in 2014, allowing SoftBank to use its stake as collateral for about $10 billion of low-cost loans. The Alibaba and Uber loans bore interest at the the London interbank offered rate, plus 1.5 percentage points.

The Vision Fund could use the borrowings to retire the preferred stock that it initially issued to raise money from the Saudi Public Investment Fund and Abu Dhabi’s Mubadala Investment Co., according to Redex’s Boodry.

“It would make sense if the proceeds go to pay down preferred equity,” which requires the fund to pay out a 7% distribution annually, Boodry said. Borrowing at a lower rate “is just good housekeeping.”

There are also risks that come with loans backed by shares of newly public technology companies, which can be volatile. Should the stock fall below a certain threshold, lenders can require borrowers to put up more assets or force them to sell shares at low prices.

The second SoftBank Vision Fund arranged a margin loan in June -- through an affiliate, SVF II Buzzard (Cayman) LP -- that was secured by American depositary receipts of KE Holdings Inc., China’s largest online platform for housing transactions. The lending arrangement was terminated, according to a July 29 filing, after KE shares lost more than half their value amid Beijing’s crackdown on private businesses.

An affiliate of the first Vision Fund entered into the DoorDash loan on Sept. 24, according to filings. The fund also pledged 490 million Coupang shares with a market value of $14.1 billion as of late September to a group of lenders, including JPMorgan Chase & Co., Deutsche Bank AG, Arab Banking Corp. and Dubai-based Mashreqbank PSC.

The terms of the loan give banks the ability to force the firm to sell shares held as collateral to meet margin calls, a person familiar with the matter said. To avoid running afoul of insider-trading guidelines in that event, SoftBank Investment Advisors partner Lydia Jett resigned from Coupang’s board this week, people said. Jett, a former JPMorgan and Goldman Sachs Group Inc. banker who joined SoftBank in 2015, notified the Korean company this week that she will step down, they said.

SoftBank declined to comment on the new loans and Jett’s resignation from Coupang’s board.

The Coupang banks are providing the Vision Fund with just $1.5 billion in financing, a person familiar with the matter said. That would equal about 11% of the collateral’s market value at the time the loan was made in late September.

Federal regulations prohibit lenders from making margin loans that initially exceed 50% of the value of the underlying shares. When it comes to making loans against concentrated stakes in volatile tech companies, the banks will require an even larger margin of safety, providing advances that equal a much smaller percentage of the collateral’s market value.