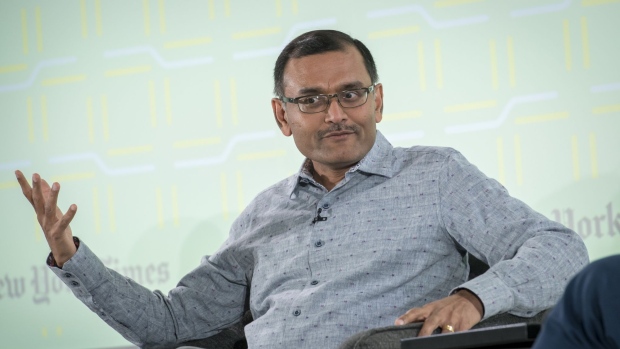 Dipchand Nishar, senior managing partner of SoftBank Group Corp., speaks during the New Work Summit in Half Moon Bay, California, U.S., on Tuesday, Feb. 26, 2019. The event gathers powerful leaders to assess the opportunities and risks that are now emerging as artificial intelligence accelerates its transformation across industries. , Bloomberg

(Bloomberg) -- SoftBank Vision Fund’s sole senior managing partner, Deep Nishar, is set to leave the firm by the end of the year.

Nishar, who’s based in the San Francisco Bay Area, announced his departure via a LinkedIn post Monday.

“Deep’s played an important role in hiring and mentoring employees, advising our founders, and overseeing our investing activities in enterprise, frontier tech, and health tech,” said Rajeev Misra, chief executive officer of SoftBank Investment Advisers. “I’d like to thank him for his many contributions over the past six years and wish him well on his next adventure.”

Nishar has been involved in more than three dozen of SoftBank’s bets, including 10X Genomics Inc., Guardant Health Inc., Slack Technologies Inc., Pear Therapeutics Inc. and Grofers, the firm’s website shows. There are only three executives at the fund who outrank Nishar, including Masayoshi Son, founder and chairman of SoftBank Group Corp.

“36 investments: 8 IPOs, 2 M&A and 2 SPACs to date,” Nishar said on his LinkedIn post announcing his departure “What an amazing six years.”