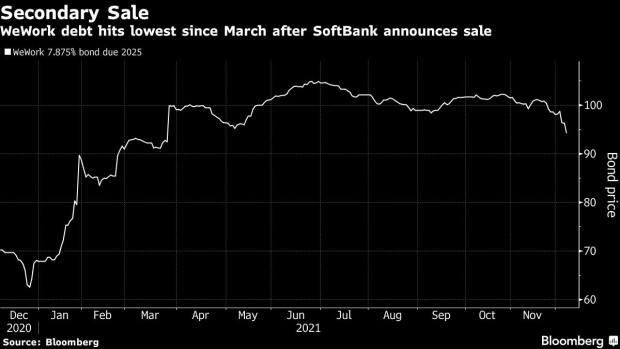 (Bloomberg) -- SoftBank Group Corp. is looking to offload $550 million of debt it provided to WeWork Inc. more than a year ago when the office sharing company faced a cash crunch and needed financing, according to people with knowledge of the matter.

The Japanese conglomerate is selling the bonds to institutional investors at around 85.6 cents on the dollar, for a yield of about 9.875%, according to the people, who asked not to be identified because the discussions are private.

WeWork’s other bonds declined after news of the upcoming sale. The company’s 7.875% bonds due May 2025 fell to 94 cents on the dollar, the lowest levels since March, and were one of the biggest decliners in the U.S. junk-bond market Tuesday, according to Trace pricing data.

“SoftBank selling in the mid-80s is not exactly a vote of confidence,” said Bill Zox, a high-yield bond portfolio manager at Brandywine Global Investment Management.

A spokesperson for SoftBank said the sale comes after “WeWork’s impressive performance for the months of October and November.” In a statement on Monday, the company said its occupancy in November grew by two percentage points from the month before to 61%, and that it sold about 55,000 gross desks in November, up from around 45,000 in October.

The bond sale “is consistent with ongoing efforts to diversify WeWork’s investor base,” the spokesperson added.

WeWork tried to go public two years ago, and failed, forcing it to get additional financing from SoftBank in late 2019 and in 2020, including loans and the notes. In October, WeWork successfully combined with a blank check company, and it now trades on the New York Stock Exchange.

The notes that SoftBank is selling now were part of the $2.2 billion of securities it bought from WeWork in July 2020, that mature in 2025. The notes will be split into two series and the Japanese company will retain a $1.65 billion portion, according to a copy of the offering documents seen by Bloomberg. They have a coupon of 5%.

A WeWork spokesperson said, “facilitating this transaction provides WeWork with the opportunity to diversify its investor base and access to a group of strong institutional investors.”

WeWork plans to host a call with investors at 3:00 p.m. New York time to market the sale, which is expected to be completed on Thursday. The office rental company said on Monday that SoftBank had extended the maturity on a credit facility for WeWork by a year to 2024.

Fitch Ratings assigned a CCC- rating to the debt, one of the lowest junk ratings, noting uncertainty around the office market including the potential for the evolving omicron coronavirus variant to hit demand for leasing space.

“WeWork would require additional liquidity sources if the office market remains depressed for an elongated period,” Fitch wrote in the note.

A representative for JPMorgan Chase & Co., the lead bookrunner on the offering, declined to comment.