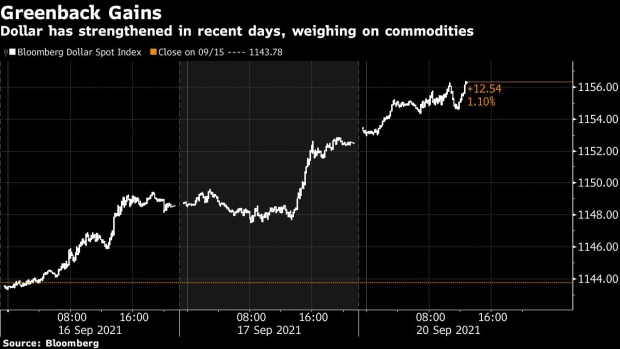 (Bloomberg) -- Agricultural commodities are among those feeling the pinch from the strengthening U.S. currency.

“All commodities are under pressure today because of an appreciating dollar,” said Carsten Fritsch, a senior commodity analyst at Commerzbank AG. “Soft commodities are no exception here.”

The U.S. Federal Reserve is set to begin two days of meetings starting Tuesday, with the prospect of reduced stimulus from the world’s largest economy adding strength to the dollar. That’s making commodities priced in the currency less attractive to investors and traders.

“Friday’s positions report showed that investors had cut their long position in sugar futures by a hefty amount,” Tobin Gorey, a strategist at the Commodities Bank of Australia, said in a research note. “Some of those investors probably cut their position further over the past couple of days. The market though is finding enough buyers to keep the falls in check.”

For white sugar traded in London, near-term refining premiums have probably reached profitable levels, and the market is still concerned about Brazil’s production potential for this year and next, he added. Crop production in the South American country has been hampered by weather conditions earlier in the year.