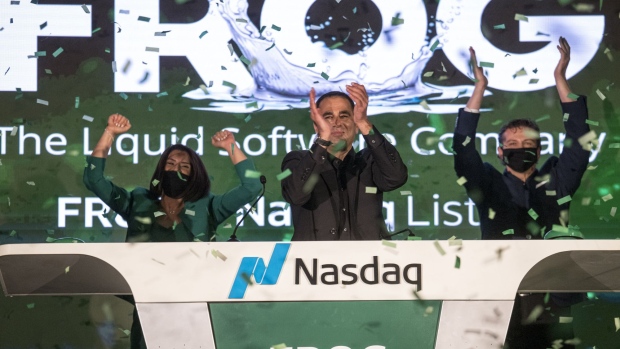 Shlomi Ben Haim, co-founder and chief executive officer of JFrog Ltd., center, applauds at the company's headquarters during the initial public offering (IPO) in Sunnyvale, California, U.S., on Wednesday, Sept. 16, 2020. JFrog, which makes tools for software developers, raised its price target to $39 to $41 per share from $33 to $37, an amended prospectus shows. , Bloomberg

JFrog’s debut comes at a crowded week for technology listings. Snowflake Inc., which also went public Wednesday, more than doubled in value after pricing the biggest software IPO on record.

JFrog had planned to sell 8 million shares in the listing, while its investors would sell an additional 3.57 million shares, according to a filing with the U.S. Securities and Exchange Commission. The shares were offered at $39 to $41 each, a range that had been elevated earlier from $33 to $37.

JFrog’s co-founders and directors -- Shlomi Ben Haim, Frederic Simon and Yoav Landman -- are selling an aggregate of 1.44 million shares in the IPO.

“The need for software leases and software deployment is just getting higher and has crystallize and amplified by Covid,” JFrog Chief Executive Officer Ben Haim said in an interview on Wednesday. “We thought that this is the right timing to go public.”

With roots in Israel, JFrog didn’t initially get the attention it deserved from Silicon Valley, said Dharmesh Thakker, a general partner at Battery Ventures.

“Nobody really knew this sleepy little company with strong fundamentals,” said Thakker, who took a board observer seat at the company after investing. He said that he’s seeing more and more promising startups getting their start outside of the U.S.

Enthusiasm for JFrog is part of a broader excitement around cloud companies, Thakker said. He expects that many cloud businesses will benefit from the work-from-home environment, as large organizations move their software online.

The offering was led by Morgan Stanley, JPMorgan Chase & Co. and Bank of America Corp. JFrog’s shares are trading on the Nasdaq Global Select market under the symbol FROG.