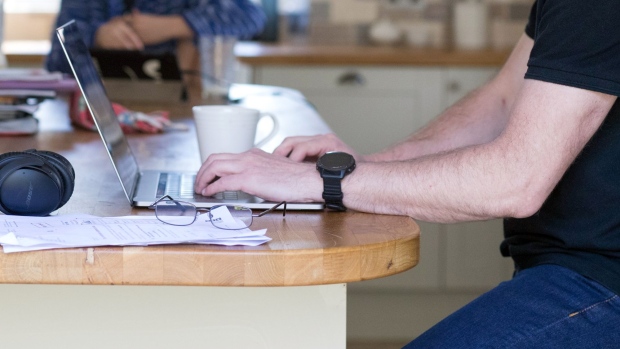 A worker works on his laptop in his kitchen whilst working from home in Danbury, U.K., on Tuesday, April 7, 2020. Among the decisions that my need to be made in U.K. Prime Minister Boris Johnson's absence are whether and when to tighten, extend or lift the current lockdown, which has seen all bars, restaurants and all non-essential shops closed, and people urged to work from home where they can. Photographer: Chris Ratcliffe/Bloomberg , Bloomberg

(Bloomberg) -- Kaseya Ltd. has agreed to buy software maker Datto Holding Corp. in a deal valued at about $6.2 billion.

The offer of $35.50 per share represents a 52% premium to Datto’s stock price of $23.37 as of March 16, the company said in a statement on Monday. The all-cash transaction will be funded by an equity consortium led by Insight Partners Inc., with investment from TPG Capital and Temasek.

Customers of Norwalk, Connecticut-based Datto include small to midsize companies that buy its software for security, data recovery and cloud backup.

Led by Chief Executive Officer Tim Weller, Datto was founded in 2007, according to its website. It acquired smaller rivals Backupify in 2014 and Open Mesh in 2017. It was bought by Vista later that year and merged with New York-based Autotask Corp. In January, Datto acquired cybersecurity company Infocyte to bolster its offerings.

The transaction is expected to close in the second half of this year.