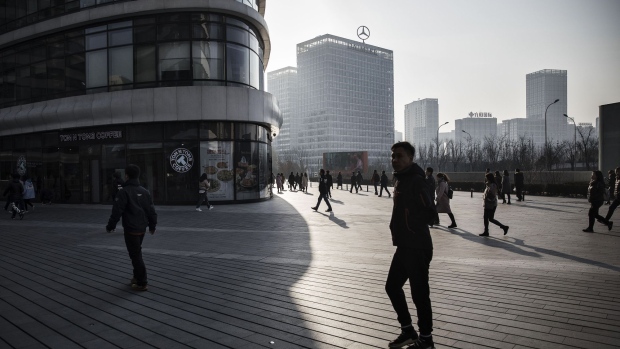 The Beijing-based company fell as much as 40% on Monday after Blackstone decided against proceeding with an acquisition, marking the second failed attempt to sell itself. Progress in satisfying the preconditions of the offer was insufficient, Soho said in a statement to the Hong Kong stock exchange on Friday.

Soho has been seen as a takeover target since early 2020, as a lack of new assets in its pipeline and declining office rents in key Chinese cities put mounting pressure on its profits. China’s commercial property space is being pressured and developers are facing liquidity pinches amid a regulatory crackdown.

In June, Blackstone offered to acquire Soho for as much as HK$23.7 billion ($3 billion), pending regulatory approval. Last month, China’s antitrust regulator said it had formally accepted the deal for review.

The Chinese developer said in March 2020 it was in talks on a potential deal with overseas financial investors that could lead to a bid for the company. In August that year it said all previous talks with potential investors had been terminated.

Blackstone announced the HK$5 per-share offer in June, which represented a 31.6% premium. The parties concluded that the preconditions couldn’t be satisfied before the long-stop date, and that it wouldn’t be extended, according to the statement.

Blackstone has been investing in office, retail and logistics assets in China since 2008 and owns approximately 6 million square meters of properties in the country, it said when announcing the offer. The firm is doubling down on Asia, seeking to raise at least $5 billion for a fund focused on the region, people familiar with the matter said last year.

Soho China was founded by Chairman Pan Shiyi and Chief Executive Officer Zhang Xin in 1995. The company’s key assets include its signature Bund SOHO in Shanghai and the landmark Wangjing SOHO in Beijing, designed by Zaha Hadid, the first woman to receive the prestigious Pritzker Architecture Prize.